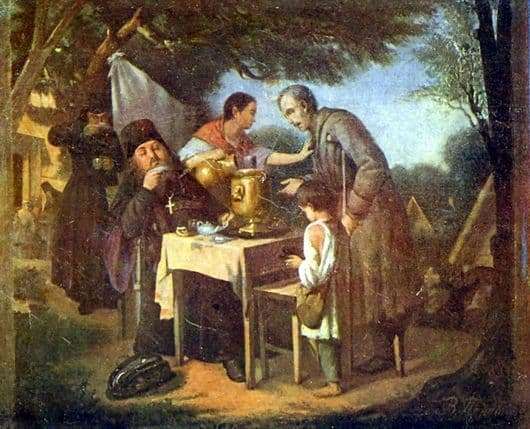 One of the most famous and widely replicated paintings of Perov’s hand. This genre scene as never before and perfectly shows a huge hole in society between the clergy and mere mortals. But even among mere mortals there is a hierarchy. This is exactly what Perov depicted on this canvas.

In front of us, a fat, unpleasant priest sits at a table and tea. He very much died from the work of his righteous and therefore sat down at the table to drink tea. But as if it were a sin, a disabled soldier came to the table with a very young lad. He came for a reason, and beg for a penny. But the holy father does not even pay attention to the request of the soldier with the boy; he, having turned his face away from them, continues to sip tea.

But the servant responded correctly, she became a girl from the table to dare beggar.

Say, do not bother to eat the joys of this holy father’s day. And behind their backs, another nun also drinks tea, but only while standing. He is not yet in a position to sip tea at the table and freeze it all up. This is how they will raise the rank here, and the soul will unfold. Then hold on…

Perov caused this scandal in society. This is not just a canvas, it is a riot – an artistic riot against the church. True, the artist never said that all the priests are such, but noted that for the most part they behave this way. He asks the viewer: where is the justice? Where is the mercy of the church and the immediate help of the poor? Such priests are not capable of such a feat. They are guided by mortal sins – vanity, enrichment.

On the mercy and love of neighbor, the holy fathers of such a well-fed formation have completely forgotten. That’s about it and the artist cried. It was precisely this injustice that he showed – bitingly, without embellishment. And I must say that quite daring for that time.