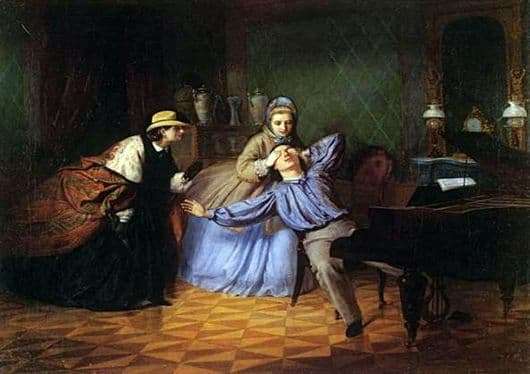 That’s about who they forgot, so forgot. Yes, this at one time a very popular painter was actually forgotten, and he already would have sunk into oblivion. If only recently staff of the Tretyakov Gallery had not found a number of his canvases in their archives. This artist worked in genre painting, that is, he described these or other episodes in people’s lives.

Moreover, the artist was very friendly with Kramskoy, no less famous Russian artist. Both of them perfectly complement each other. But only Kramskoy became famous as a master of portraits, and Zhuravlev – a master of genre scenes.

And now we have one of his works. See how the interiors of that time are clearly shown: wallpaper, floors, the presence of a fireplace with a fireplace mirror. As for the owner of this room, the artist has only let us understand that with a musical instrument only, the young man is very educated. And now two friends came to visit him. One of them is clearly his bride, but the other could be a relative. They came to visit him and decided to play a little of him. They entered quietly from the street, and while he was playing music, one of the girls approached from behind and closed his eyes.

The canvas does not carry any meaningful load, just a light note from the life of a person of average means. But how much sincerity in it, how much emotionality. It is evident that the guy did not expect a surprise, and one of the girls is even inclined to condemn the actions of a friend. Pay attention to the costumes and girlfriends. One of them is dressed a little more elegantly, the second is slightly simpler. And which of them his beloved will not immediately understand. Although… yet by facial expressions it can be understood that the lady in black is his bride.

The painter has many different canvases with many realities of life. Often he painted on canvas the needs of orphans and widows, drawing children. At exhibitions his works invariably aroused the interest and delight of the public, and of his colleagues. But nowadays the name of the artist and his creations were slightly forgotten.