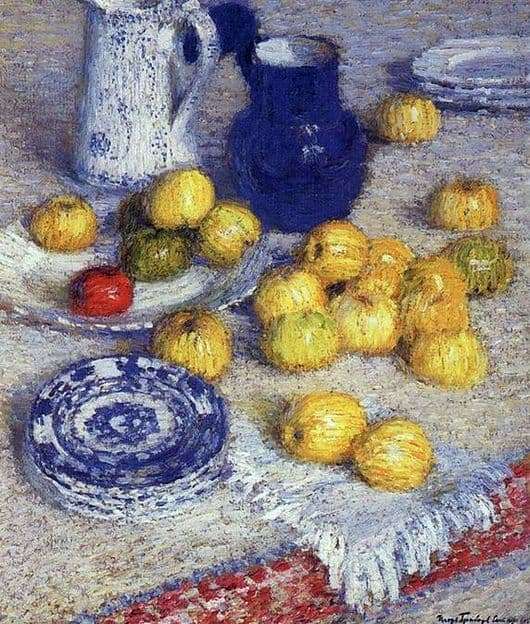 Art critic, art historian, restorer, teacher, architect, artist and all about one comprehensively developed man Igor Grabar, who because of his titanic work in the cultural field could not go down in history, he considered rest of one activity to another as a rest.

In addition, Grabar traveled a lot and everywhere at the same time, he learned something, after returning home in 1900, he had a “creative period”, after a long absence he again falls in love with Russian nature. Grabar, inspired by this love, begins to work hard as an artist, he creates many works that are typical of the Russian countryside.

The picture “Apples”, as well as possible, describes the artist’s reverent attitude to the Russian nature of her primitiveness. The picture shows a rustic table on which there are plates, typical for the village jugs, and apples, mostly yellow, are carelessly scattered on the table.

The work “Apples” is a still life, which is written in the style of impressionism, since it was the artists of this trend that inspired the author to write pictures after he saw their pictures in European galleries. But Grabar should not be blind to all the ideas of impressionism, he is trying to make a national contribution, to show impressionism in Russian.

And it should be recognized that the attempts to “Russify” impressionism were not unsuccessful, because when looking at the image, one always remembers an open, cozy grandfather’s house, a colorful summer garden, where various alluring smells of nature soar.

The Russian audience, not only sees a beautiful picture, he immediately realizes that it was written by a man who loves Russian nature and knows the Russian soul from the inside. It seems that the canvas conveys even the sweet smell of apples that have the taste of a carefree childhood.