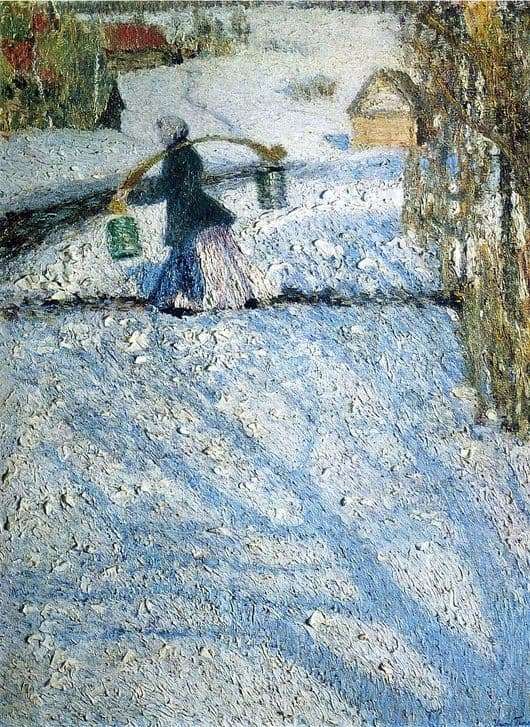 The painting I. E. Grabar depicts the March day. This is a rural landscape. A young girl walks, carrying two buckets on a yoke. She rushes for water. This is evident from the fact that she carries the yoke on one shoulder. On her head – a warm scarf, the girl is dressed in a dark padded jacket and a skirt to the floor. And outside the window is March, and yet the girl is dressed warmly.

It is not for nothing that people say that when the brand has arrived, two portholes should be put on. After all, despite the fact that it becomes warmer, especially in the sun, it is still damp on the street. And it is especially felt in the evening. Understand that evening, you can on the blue shadows of trees on the melting snow. Such a shadow can only happen in the red rays of sunset. On the tracks the snow has melted. The path goes somewhere off into the distance, and the girl needs to go a long way to the well in order to collect fresh water.

There are several wooden huts. On the right are trees, they have already thrown off warm snow caps and are waiting for heat.

Only the earth is still in no hurry to throw off the snow duvet. We see in the picture all this snow mass, which will not soon surrender to the rays of all the arriving March sun. But the snow has already become nosed, with ice, melted by the sun, lumps on top. But even this aged snow seems to the artist to be something marvelous. Grabar caught that elusive blue of snow, which can be seen only at a certain time of the day, more precisely, when the day is about to be replaced by twilight. On the street – peace, so quietly and calmly, and only heard as a girl steps, breaking a thin ice crust formed on the track. Only this crunch is heard in silence.

The air already smells in the spring, and to show it, the picture is painted softly and easily. The viewer is attracted to the picture by the plainness of the plot, harmony and beauty of rural life. The artist depicted the usual everyday life of the villagers. But he saw in them inimitable beauty. Grabar admires the awakening nature, admires the upcoming spring, trying to show the still hidden power of the meltwater that is about to burst into the rural landscape in streams.