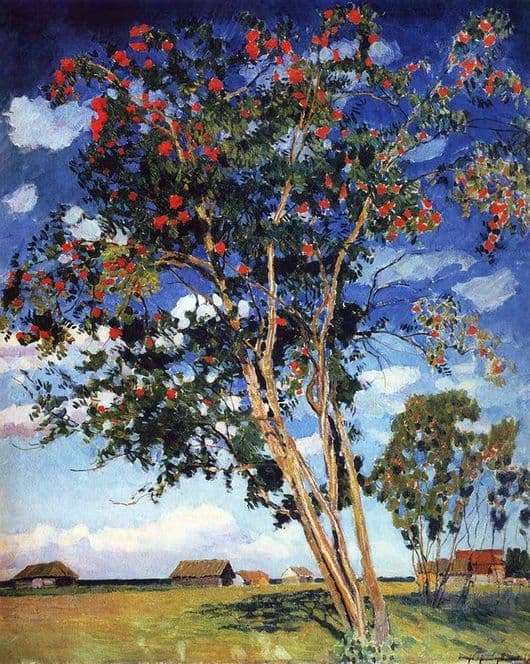 Cloth “Rowan” by Igor Emmanuilovich Grabar belong to a rather late period of the artist. The picture is dated 1924. It was during this period, after a break of almost fourteen years (when the artist was engaged in scientific activity and practically did not write) Grabar again takes up a brush.

Building a picture is quite simple. Several grouse, filling almost the entire canvas, written on the background of the sky with elements of a rural landscape. Very simple plot. However, something in this picture is alarming. A feeling that is rather intuitive at the beginning, on closer examination of a picture, sometimes it even turns into a feeling of mild anxiety.

The upper part of the picture is made in dark colors: dark blue sky, dark green leaves of rowan trees (although autumn is clearly depicted in the picture!) And bright red grapes of berries, only indicated by the artist… enhances the sense of misfortune hanging over thin trees. And this is quite unusual, because in general the canvas is written in bright colors.

It is also surprising that the light in the picture of Grabar falls on objects is somewhat unreal. The village illuminated by the sun and the trunks of the rowan trees, the shadow falling from the tree trunks – all this indicates that the source of heat and light is on the part of the viewer. And at the same time it is from there that the darkness that is observed in the upper part of the picture comes. What did the artist want to show? What is a terrible cloud hanging over the country, but it will pass and the sun will look out again? It is unlikely that this will ever be known.

However, most likely, Grabar, who at that moment gradually deviated from the manner of writing of the French Impressionists, once again experimented with drawing light and shadow, moving away from a clear decomposition of colors and finally finding his own style, generalizing the beauty of Russian nature.