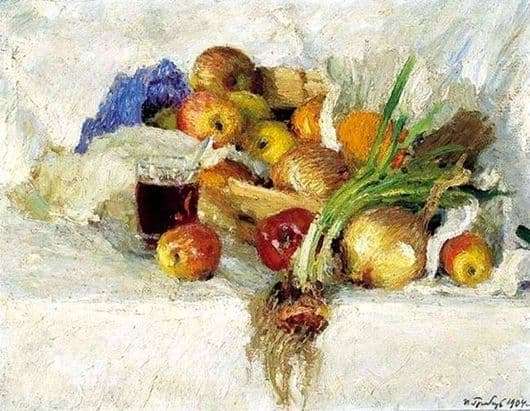 Already in the 20th century, Igor Grabar began to develop the favorite genre of the 9th century – still life. In the painting “Still Life” you can clearly see the combination of realistic light transmission, which so visually and precisely change the color of individual objects. Igor Grabar performs a still life, focusing not on the subjective vision, but by using the air-light atmosphere provides the viewer to see the objective reality of what is drawn.

The picture is a rather dense grid, which in fact consists of a large number of small strokes, which at some distance are intermingled with each other and create the impression of the omnipresent diffuse light that surrounds all objects. This style has always distinguished Grabar from other masters. It is worth noting that the main criterion for writing a picture is the point of view, which is present in the viewer at a certain moment. Obvious is the fact that the picture was painted in the predominance of bright light. At the same time, glare and the play of light and shadow are perfectly visible. In that case, if we consider this creation close, then at first it may seem that the whole picture consists of this placer glare. If you look at this work from the side, then the picture is immediately filled with nacre,

It is also worth adding that Grabar was the pioneer of a new understanding in this traditional genre. Naturally, he was not the founder of this genre, but only managed to interpret it in a completely new way. As can be seen from this picture, he not only transfers objects to the canvas, but also thanks to the play of shadow and light, convey the full power of colors. Thus, it turns out not just a still life, but a work filled with a completely different sound, where you can see the triumph of light.