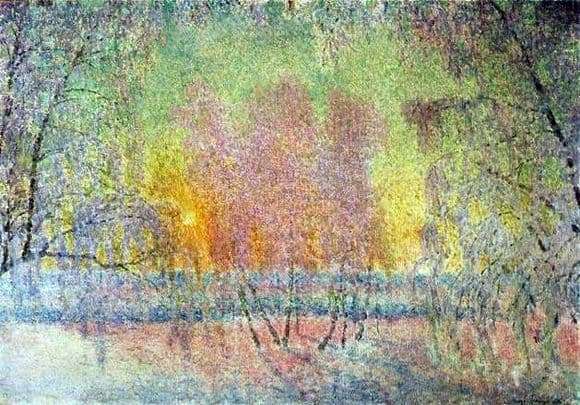 Igor Emmanuilovich Grabar is a multifaceted creative person. He was loved by many for the unique and very beautiful landscapes of Russian nature. Almost all his life he was an active participant and leader of the artistic life of the country. Distinguished by industriousness and without the rest he invested himself in current projects, Grabar managed to realize himself in various spheres. Being a significant artist, he was a famous restorer, art historian and critic, was actively involved in museum activities. Despite the successful completion of the law faculty in St. Petersburg, Grabar chose the path of the artist as the business of his life. During the formation and the rest of his life, he will rely on the work of Ilya Repin and Andrei Rublev.

The landscapes were the leading direction in the master’s images; he especially liked to display the winter period. According to him, it was the snow landscapes that hid an elusive fairy tale and immense magnificence. The artist was attracted and fascinated by “silver” robes, so fleeting and unique in their appearance. Grabar notes a special multidimensional and changing picture, which can be seen by watching the frost on a sunny day. One of his famous paintings “The Tale of Hoarfrost and the Rising Sun” was painted while in the country. As the painter admits in his notes, he was literally taken aback by a view that opened from a window of amazing beauty.

Early frosty morning, a small sun, timidly making its way through the branches of “trees-fairy tales” bound by hoarfrost – birches. The sky and snow, covered the field with a thick blanket, shimmer with multi-colored hues from crystal blue to orange-pink. It is also important to note that the painting “The Tale of Hoarfrost and the Rising Sun” was conceived as part of the painter’s long-standing idea to create a variation of twelve canvases on the theme “Day of Hoarfrost”. By the time of writing this picture, Grabar had a solid collection of sketches. The problem was the artist’s demandingness – following the lessons of the French impressionists, he most appreciated the “realism and truth” of the images. With all his heart he was in love with Russian nature, he wrote exclusively from nature, outdoors.

It’s an amazing thing, but upon completion of the work, Igor Emmanuilovich later noted in his notes the pretentiousness of the name of the painting, which he wanted to convey to the original feeling of the moment of the magic of the frosty morning. In addition, I did not agree with approving reviews regarding this work. The artist believed that the etude of 1906 was much thinner and better absorbed emotions than the full picture that followed.

Grabar called his main mistake the pursuit of crushed and fragmented images, wanting to recreate the effect of the radiant overflow of multicolored hoarfrost diamonds in the first rays of the sun. But, as a result, the transmission of light synthesis and the original impression was lost.