Home ⇒ 🎨Grabar Igor ⇒ Description of the painting by Igor Grabar “Portrait of O. Grabar-Dobrianskaya, the mother of the artist” 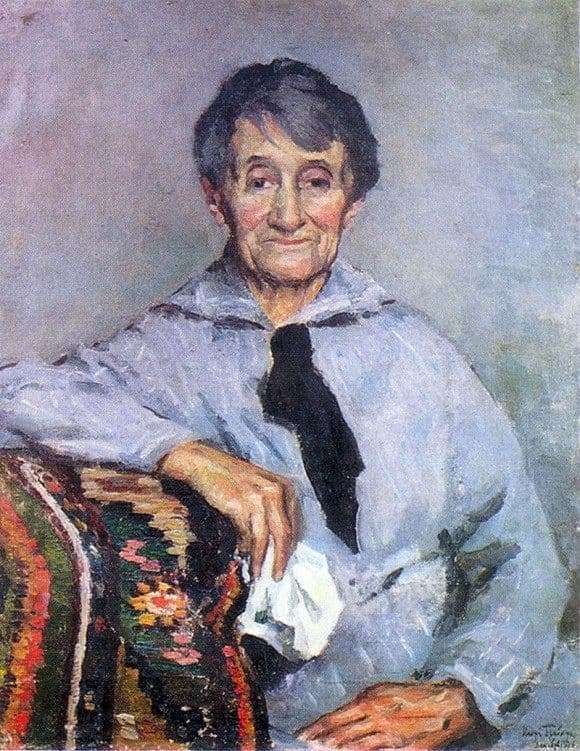 Igor Grabar is a Russian post-impressionist artist. To paint the portrait oil paints and canvas were used.

The painting, written around 1925, depicts the artist’s mother, frozen in a natural pose. A woman is dressed in a blue dress, decorated with a black tie. Such dresses were worn by many women of that era. The woman is short-haired, her hair is gray, which can be clearly seen due to the absence of any headgear.

Her right hand rests on a chair, or a sofa covered with a colorful bedspread, or a walkway. This path was in many homes of Soviet citizens, so there is nothing surprising in the fact that it is depicted in the picture. At this time, the artist attaches particular attention, not just to writing portraits, but to painting pictures that reflect Soviet reality, as the painter saw.

In the hand of a woman in the portrait is a large white handkerchief. The left hand rests on the knees in a relaxed pose. The artist’s mother is in quite an old age, she is thin and dry.

Eyes wide open, eyes fixed on the viewer. The complexion is healthy, there is a visible blush on her cheeks, and yet it seems that this woman is very sick, or exhausted by long years of hard work, as can be seen from the numerous wrinkles that strewed her face.

In her youth, the artist’s mother was a member of the Slavic liberation movement, which was why she and her husband had to leave Budapest and settle in Russia.

The woman has experienced difficult times associated with the political and civil changes taking place in the country, which adversely affected her health. Writing a portrait of the mother for the artist has become symbolic. As a child, he spent little time with his parents, which left a deep wound in his heart.