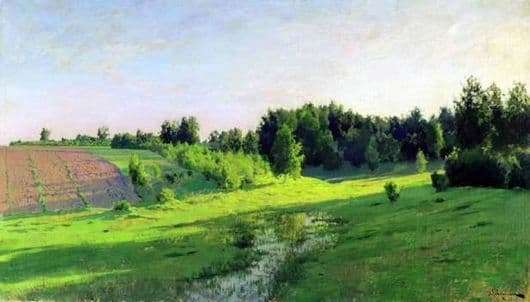 There are several landscape artists who amaze with their skill. Among them, a little isolated Levitan. This master out of under the brush just amazing landscapes of Central Russia. Some unprecedented beauty in the ordinary arises on his canvases. It would seem that a simple hollow between the forest and the field and this border is observed either by the creek, or simply by a large puddle. No matter! It is important that all of this is familiar to us and you can even notice somewhere almost the same terrain.

But look how the artist great noted the very beginning of sunset. The trees, which are not very high, suddenly had big shadows – the first harbingers of twilight. In the foreground, it is already completely dark, but the sun is still shining from the forest “corridors”. It certainly is not for long. Soon everything will become dark and a bit uncomfortable. But for now, light and shadow. The sky in the clouds, lush greenery on the trees – from the sunset rays, it became even darker. Here it is Russian silence and grace!

Levitan never competed with his colleagues. He rather collaborated with them, and sometimes he studied something or taught and advised himself. But colleagues were not simple. Suffice it to recall the great painter Shishkin. This is another bright personality that created the canvases with photographic accuracy and Russian nature came to life in his paintings. But Levitan was more friendly with Repin, they even sometimes posed for each other and as a result: Repin has a self-portrait of Levitan, and the latter has a self-portrait of Repin.

Together they went on expeditions to work in kind. This friendship gave them a lot: new ideas, new knowledge, new sensations. And of course, new canvases with magnificent landscapes that Russia is now proud of. By the way, the collector and philanthropist Tretyakov gladly bought up their canvases and exhibited the works of these authors in his gallery. They are still there.

“Evening shadows” Levitan – amazing and colorful confirmation of what is in the usual beautiful.