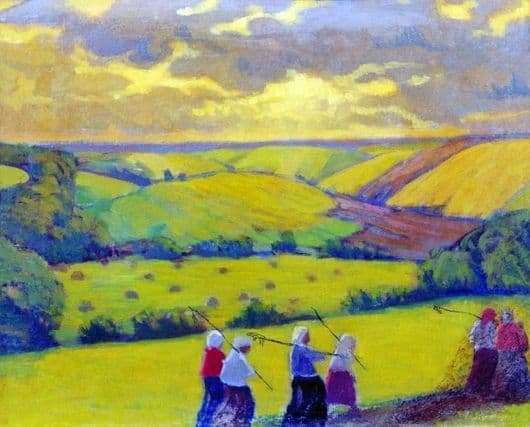 The master depicts one of the summer evenings in the picture. On the canvas you can watch the girls returning home after mowing. Summer is the most important season of the year, for these people, because wintering directly depends on how well the work will be done on haymaking in summer.

The picture shows women, some of them are clearly already aged, but this is not accidental. They go home and do not seem to talk among themselves, this is due to the fact that work in the field is very hard and exhausting, and takes away all the forces.

The artist writes a little twilight with a bluish tinge, because of this, everyone in the neighborhood, including women’s clothes, also takes on a bluish tint. In the background are visible, just vast expanses of fields and forests, meadows and hills. Everything around including the sky has a yellowish-blue shade, in places gradually turning into green. Such shades were chosen not by chance and looking at the canvas involuntarily casts a variety of thoughts about rest, after a hard day’s work, under the exhaustingly scorching sun from above.

The whole atmosphere conveys the mood of fatigue, twilight, the coming evening. Kustodiyev is very much to the simple motives of everyday life, ordinary people, therefore, he has many similar works, but they all have a common idea of ​​originality.

In the picture, the play of light and shadow in the conditions of the coming twilight is quite clearly conveyed, this can be seen in the bushes and trees, which not only have all shades of green in themselves, but also taking into account the onset of the evening. Due to such a resonance of colors, the canvas very accurately conveys the mood exactly the one that the artist laid in him, at the time of his writing.