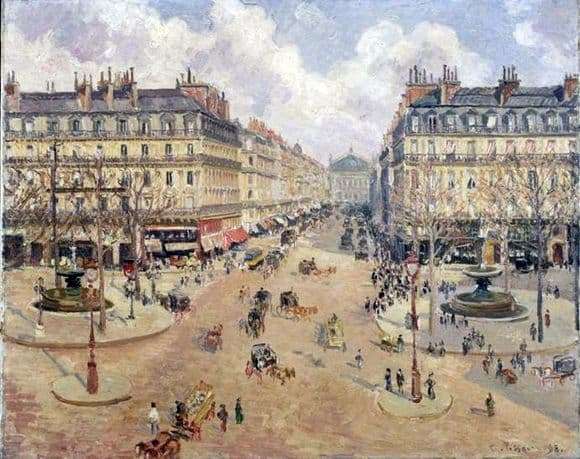 Camille Pissarro devoted a lot of time to working on his canvases and was deservedly considered the patriarch of French impressionism. And the main theme of his work is Paris. The Creator did not set himself the goal of conveying the external image of the city. Rather, he wrote feelings and emotions.

The picture “Opera Travel in Paris” can be seen a lot of people, umbrellas, carriages, moving in different directions, wet pavement. But it is not just written, surprisingly the author was able to convey the general mood of the city. It’s just some kind of magic of colors. The air is as if filled with warm sunshine, raindrops. And behind the fog at the end of the street the whole city is hiding.

One of the favorite motifs of Pissarro are the streets stretching into the distance. And this picture is the perfect compositional solution for this subject. Multi-storey heavy houses do not overload the picture and are shifted slightly to the side, and attention is attracted by the flow of people going about their business. And this fuss does not disturb the peace and tranquility emanating from the canvas. The author subconsciously increases the length of the French streets. In fact, the opera is much closer than Pissarro is depicted. On each canvas of the artist Paris is unique.

In this case, a sunny, snowy winter day is depicted, the shadows of people and carts are barely visible. The combination of huge buildings and seemingly tiny silhouettes of people against their background is presented in a special way. Exactly and at the same time unobtrusively prescribed details in the picture, shop windows, fountains, lampposts.