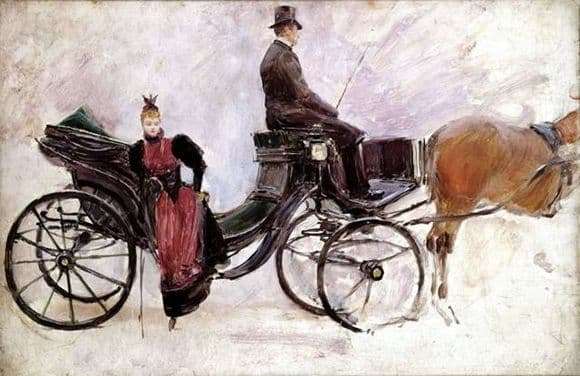 “Victoria” belongs to the hand of Jean Bero – French salon painter. At the heart of this direction is a rationalistic, checked system of rules prescribing a certain approach to the depiction of an object. Brilliant compositions and artistry, a tendency to an idealistic “sublime” reflection of the surrounding world.

Who lived and truly in love with Paris, J. Bero captured the new look of his city. Street scenes of everyday life of citizens, exquisite ladies and elegant gentlemen of high society, commoners. The scene and the plots were varied and amazed with skilful detailing and the highest realism.

However, because of this, the master was subjected to ruthless criticism, accused of primitiveness and artificiality. To put it in today’s language, the graphic technique of Jean Berot was close to the photographic style of writing. Art critics and artists reproached him that such a style was convenient from a commercial point of view, matching the tastes of the public, but was unchanged and did not introduce something new, frozen in place.

However, such paintings as “Victoria” found their fans. Alas, regarding this picture, as well as the entire creative work of J. Bureau, little information has been preserved. Therefore, it is impossible to say for sure whether the name was assigned to the picture, by the name of the woman imprinted on it, or had a different meaning.

In the image of a lady emerging from the span, accidentally or intentionally “caught in a frame”, an image is born not only of a new city, but of a new time and new ideas. Bright paints, sweeping broad strokes, producing a feeling of a swift and confident master technique. He seeks to convey the mood and moment of each day, knowing how everything is changeable and short-lived.

The right side of the picture, as if not fully written and, in general, gives the impression of a sketch, and not a fully completed work. It seems that this technique by J. Bero indicates that the “beautiful era,” as the French called it, has irretrievably gone.

Therefore, his works are simultaneously perceived as a new look at the renewed Paris and serve as a reason to recall the past, to warm the heart with sad echoes of the past.