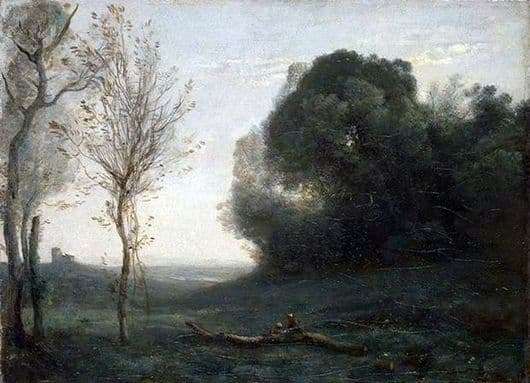 It should be noted right away: the canvas is so old that even the photo shows how the paint has a little decayed, and has darkened in some places and therefore it is not always possible to understand what is happening on the canvas. Although in reality there is nothing so unprecedented on this canvas.

A simple morning of ordinary people who live far away from their masters. By the way, precisely because of the darkened colors, it is not immediately possible to discern a house in the thick of the forest. He already contour can be guessed, although maybe this was the idea of ​​the author. But then the question is, what are the two figures doing exactly in the middle of the canvas in the foreground? Either they eat breakfast, or they are already working on cutting wood.

It is not clear, but both versions may well be real. This big dagger thrown in the middle of the clearing could well play a role both as a table and as a material for cutting. Moreover, the traces of the work started are already visible to us in the form of a pair of sawn logs.

Another thing is surprising: how subtle, how accurately the feeling of the early morning is grasped. The sky is not even blue, but some kind of milky gray. The terrain in the distance is clearly in the fog. Only the trees in the foreground are sharply traced, which give us an idea of ​​what time of year we fall in – this is most likely autumn after all. Although it may be spring. The second is preferable, because the lush green grass tells us that it appeared only recently. Yes, and the young tree that stands in front, it seems only – just starting to pick up color and he has his own crown.

Although it can be presented in a different way: the leaves have fallen off at this tree first, as the forerunners of autumn and the wood is harvested for the winter. Also, by the way, a good version. So the canvas gives plenty of imagination and the main thing here is not to re-fantasize the situation. Otherwise, it is possible to imagine something that the author could not have come to mind. But who knows…