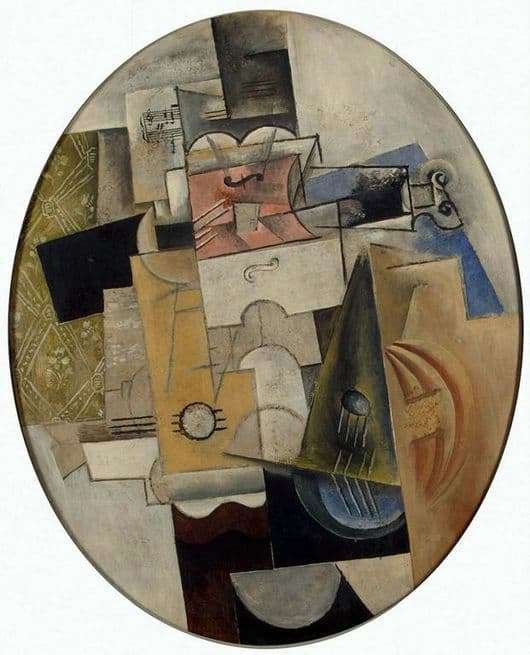 And do not even try to understand anything in this work of the great master. But no… try to understand what he wanted to tell us, mere mortals. Perhaps he tried to convey to us the whole range of sounds that these musical instruments make. True, at once you won’t understand what tools are in question. There is a guitar neck, contours of a violin and a double bass, there is a place and a piano. There are also music strips… Everything else is multifaceted, polyphony, full of fantasy by Pablo Picasso.

Connoisseur and admirer of this artist at once everything will become clear. But for those who come across his works for the first time, and even more so with this canvas, they will have to try to understand what the great master meant.

Most likely, he really wanted to portray the sound, or rather the sounds of a multi-voiced orchestra. That is what we hear during a classical concert from the stage or during an opera and ballet performance from the orchestra pit. He tried to uncover the unimaginable bustle of sound that comes to us in a somewhat distorted version. This is all on the canvas. True, these sounds are exactly what the author himself imagines, no more…

In our consciousness, they may be different and more beautiful and harmonious, but the author does not pretend to be exceptional in the image of sounds. Rather, he simply lets us know that sounds can be portrayed on canvas. Just as time portrayed Dali.

By the way, there is some rivalry between the two authors in this.

But the truth is: if Dali portrayed time, Picasso tried to portray the sound, so that the canvas itself also made a sound. Sometimes, it seems that thin music is flowing from this canvas. And it should be noted that both authors managed to innovate them – we see the time, we feel the music.