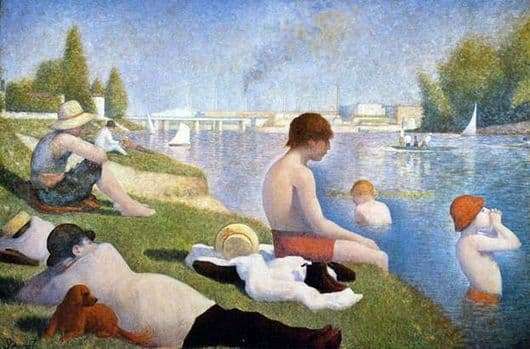 The young artist preferred to create his creations not on an ordinary canvas, but on wooden boards. He wrote sketches. In 1883, the artist finally decided on the big picture. So he sought to attract the attention of the Salon, which was to be held soon. The plot was a scene on the banks of the River Seine near Paris. Many impressionists preferred to depict these particular places.

The picture was created during the whole year, but the Salon jury rejected it. But soon Seurat and the same rejected as he, organize their own exhibition and Seurat was able to present his creation to the public.

The painter was able to convey the special atmosphere of a warm summer day. In front of us is a suburb of a big city with its bridges, huge stone buildings and factories pipes. First, it seems that this canvas is impressionistic. The colors are very bright, and the rower’s figure, which is on the right, is deliberately cut off by the frame. These features were peculiar to the works of the Impressionists.

But Seurat carefully built the whole composition. Previously, many etudes were made, and each figure was worked out to the smallest detail. Part of the poses was borrowed by the painter from the pictures of old artists.

Asnières is a suburb of Paris, which is located west of it. We see young workers enjoying their rest on the river. In the process of writing the canvas Seurat did not use a special technique, which he developed later. It was called pointillism. But then some parts of the picture were added.

The painter applied particular points of the colors of contrasting shades in order to create a curious effect of vibration. So on the boy’s hat were added dots of two shades: blue and orange. Forms of paintings as much as possible. The figures are depicted in profile and resemble the reliefs of ancient Egypt.