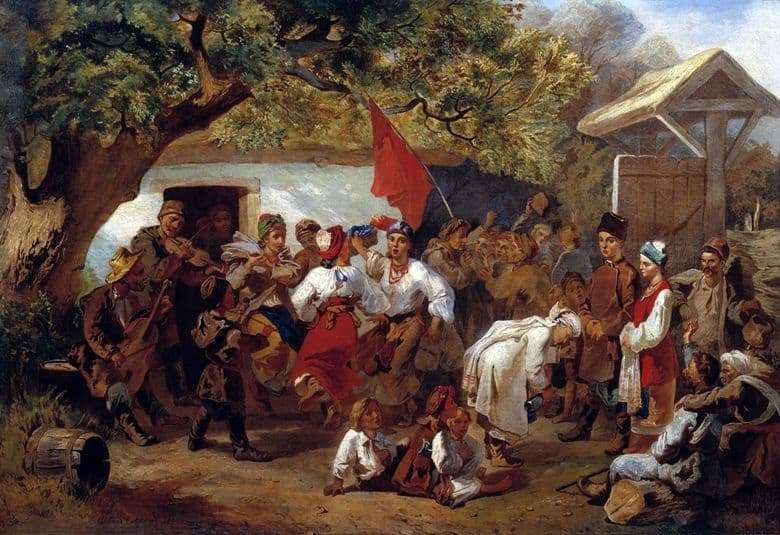 Sokolov’s painting “The Wedding” was painted in 1860. Here we see the traditional wedding festivities that took place in Ukrainian villages. On the canvas depicts a lot of people – the whole village gathered to congratulate the bride and groom.

In the background is a white earthen house, from which dressed little girls look out. Immediately before the house grows a large, strong tree. Probably, the artist depicted such a large tree as a symbol of fertility and wealth. In front of the house young girls and boys dance and have fun. Four Cossacks in white shirts are having fun at the festival. Several men have settled under a large tree and play musical stringed instruments.

At the bottom of the canvas, we see three small children who do not yet understand the reason for such fun and just sit and look at the dancers.

The main people of any wedding – the bride and groom. We see that the young couple entered the gate and is approaching the dancers. A man in a white suit stopped in front of them, holding a bottle and a glass in his hands. Newlyweds are dressed in festive costumes, but you can see that this is not a wedding dress: there is no flower wreath, hair is not braided.

The girl is dressed in a white shirt, red cape, in her hands she holds a white patterned kerchief. Such clothes of a young couple tell us that the image on the picture is not the first, but the second day after the wedding. Traditionally, the wedding in Ukraine lasted a week. Confirms that this is the second wedding day and another symbol – you can see that right in the center of the picture there is a big red flag.

This item has an important symbolic meaning. In Ukraine, it was very important for a girl to marry exclusively virgin and immaculate. Such a red flag, also called the banner, means that the girl did not have a close relationship with a man before the wedding. If the flag were white, it would be a great shame for both the girl’s family and the groom’s family. The red flag, towering above the crowd, is carried by fellow villagers, who are depicted in the depths of the picture.