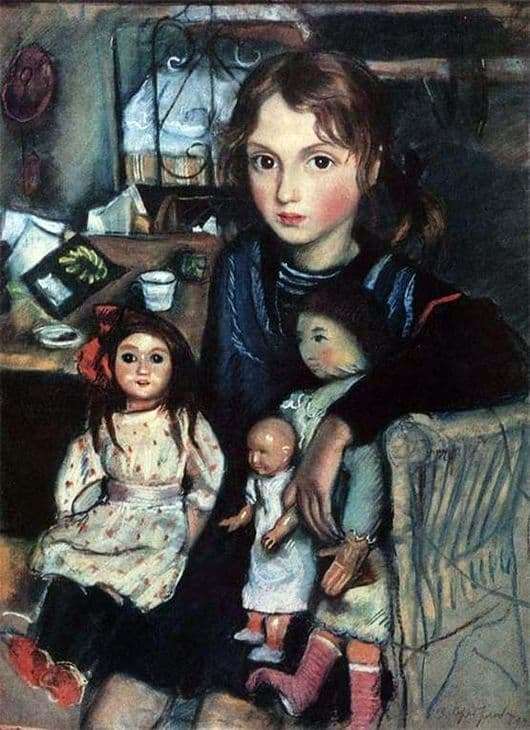 The golden fund of Russian art consists of the works of a talented Russian artist and master of fine painting and graphics – Zinaida Serebryakova. She was a student of the famous painter Osip Braz, and became one of the first Russian women who entered the history of painting.

Basically, Serebryakova painted herself and her children. This was due to a lack of money. After the death of her husband, left with four children and a sick mother, the artist moved to Kharkov from Moscow, and then to St. Petersburg.

Serebryakova had four children – two boys and two girls. They all began to draw early, which could not but rejoice the mother. And subsequently, the passion for art reflected in the fate of each child. The eldest son, Eugene, became an architect and restorer. He took part in the restoration of architectural monuments of Peterhof, and he also wrote several landscapes in watercolor.

Alexander, in the summer of 1925 came to Paris, where Zinaida herself stayed on her earnings. He painted the street panoramas with old castles and houses, paintings, landscapes on the beautiful banks of the Seine. Later, he began to design the interiors of the castles of wealthy French, and was also one of the creators of the city parks of Paris. Here he was a famous and authoritative person.

The third child, Tatiana, graduated from the choreographic school in Leningrad, worked as a theater artist in Minsk and Leningrad. After moving to Moscow, I got a job at the Moscow Art Academic Theater and then to GITIS. Only at the age of 36 she was able to visit her mother in Paris.

The youngest daughter, Catherine, became the main heroine of almost all the paintings of the artist, by which you can trace the maturing girl. She began to write it from early childhood, in the period of post-revolutionary time and before emigration. Later, as an adult, Katya also enjoys painting and moves to her mother in Paris to help her survive somehow, dedicating herself entirely to this.