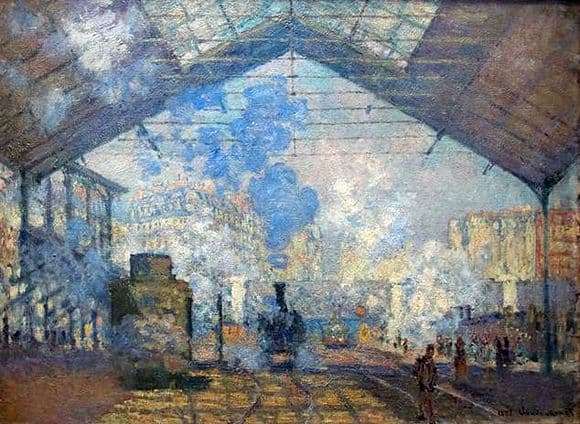 Monet’s paintings can be found in thousands. They have their own style, their own texture and technique. As you know, Claude Monet was an impressionist, so he tried to find such techniques that the paintings were realistic and alive.

In 1877, Claude Monet came up with the idea of ​​creating a series of paintings. He dedicated them to one of the Paris railway stations. Thus, the famous painting “Station Saint Lazard” appeared – the first picture in the series.

In total, Claude Monet painted twelve paintings on the theme of the station. In each picture he depicted the station at different times of the day, from different sides. With each new picture the station transformed, became more modern and new. Well, since “Saint Lazar Station” is the first picture, then you can see the station in its earliest version.

Monet’s picture is a bit clouded by trains and morning

fog. There are three trains that depart on their flight. Due to the fact that the outlines are clouded, people are poorly visible. The clearest figure in the picture is a man dressed in a classic suit and with a hat on his head. The remaining figures of the picture do not even have clear contours.

At the top of the picture is a glass arched ceiling of the station square. The roof of the station is still being repaired. And below the rails are visible. In the distance, the contours of the French buildings and the outlines of the city are traced. Monet paid much attention to color. The picture is made in beige and blue tones, the brown earth and the trains are bright color spots.

The following paintings by Monet from the series became clearer, they show trains and people. And the first picture was symbolically just a foggy beginning. “Station Saint Lazard” is stored in the Orsay Museum, in Paris. It is interesting that some of the paintings in this series were bought by unknown persons, and the rest are kept in various museums around the world, including Japan, Italy and the United States of America.