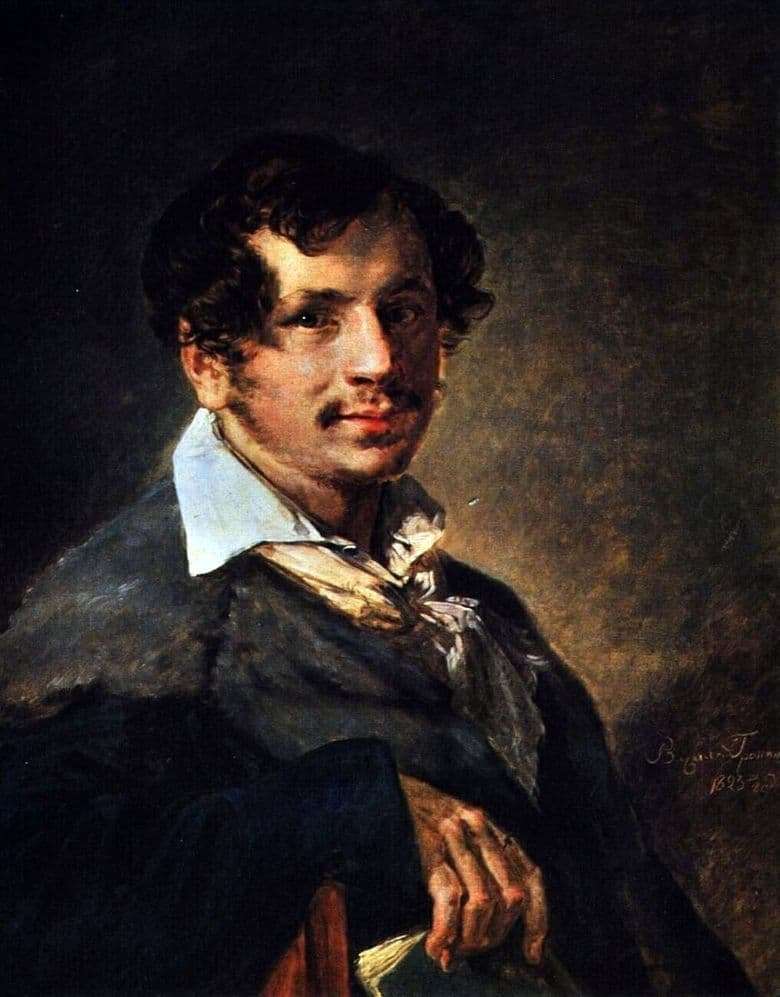 This work of Vasily Tropinin is considered one of the best in his work. Here we see a portrait of the famous Russian opera singer Peter Alexandrovich Bulakhov. The singer made his debut on stage in just two years before writing a portrait. Tropinin quickly made friends with a man and decided to capture his image on canvas.

It is believed that the most difficult to portray the most simple person in his usual environment. We see that Bulakhov is sitting in a chair and posing for the artist. The man leaned loosely with his right hand on the arm of the chair.

He is not wearing a full dress, does not wait for guests. He is wearing ordinary homewear – a dark blue robe with a warm fur cape, and a white scarf is tied around his neck, from which a snow-white collar is knocked out. Bulakhov has dark curly hair, which obviously makes him younger, gives youthful excitement. Eyes expressive, a little funny and mischievous.

Artists always love to depict subtle, but very important details in their works. In this picture, at the very bottom, there is a small green book, which Bulakhov holds in his hand. Holds loosely, with two fingers, as if she would drop it by chance now. The book shows that the famous opera singer was an intelligent, well-read man, but his innate mischief over the years has not faded away.

The color scheme of work is muted, dark colors are used: black, dark blue, brown. Perhaps the artist tried to convey a homely, somewhat intimate atmosphere. There is no need to hide or pretend, you can be yourself. Behind Bulakhov, only a single, dark background is depicted. There is neither expensive decoration, nor pictures in gilding. Everything is very simple, unobtrusive. The brightest spot at work is the face of Pyotr Aleksandrovich. As if the inner light illuminates it, causing the eyes shine and a modest smile.