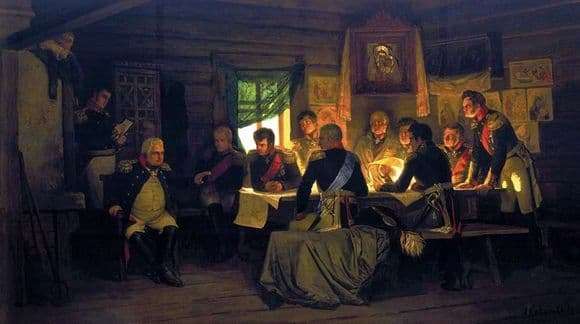 This picture represents an extremely important event that played an important role in the history of the Russian Empire. The plot reflects the collection of commanders, which took place in the early nineteenth century. Its initiator was Michael Illarionovich Kutuzov. After the recent battle, known as Borodino, the Russian army suffered heavy losses. The ranks of the soldiers significantly thinned, and this forced the commanders to take an important decision. The meeting took place in a small village called Fili on the thirteenth of September 1812.

The idea is to surrender Moscow without a fight and thereby preserve the remaining army. Thus, Napoleon’s troops will be crushed sooner or later, since such a strategy was the only way out in the current situation. Kutuzov’s army advanced along the Ryazan road, after some time going to Kaluga. Located eighty kilometers from Moscow, the army was replenished with people and ammunition, and also regained its strength after the last clashes with the French. This decision was a real salvation for Russia, deciding the final of the war and proving that Mikhail Kutuzov was a brilliant strategist and commander.

The painting depicts such personalities as Kaisarov, Uvarov, Kutuzov, Tol and others. There is a dispute between Mikhail Illarionovich and the generals, in particular, Venigsen. They discuss the battle that took place near Moscow between the soldiers of Napoleon Bonaparte and the Russian soldiers.

The artist read about this event in Leo Tolstoy’s novel War and Peace, which inspired him to create a canvas and capture this historical moment. He put into the picture the veracity and emotionality of the characters, emphasizing the psychological tension and the importance of everything that happens. The canvas was the diploma work of Alexei Danilovich Kivshenko.