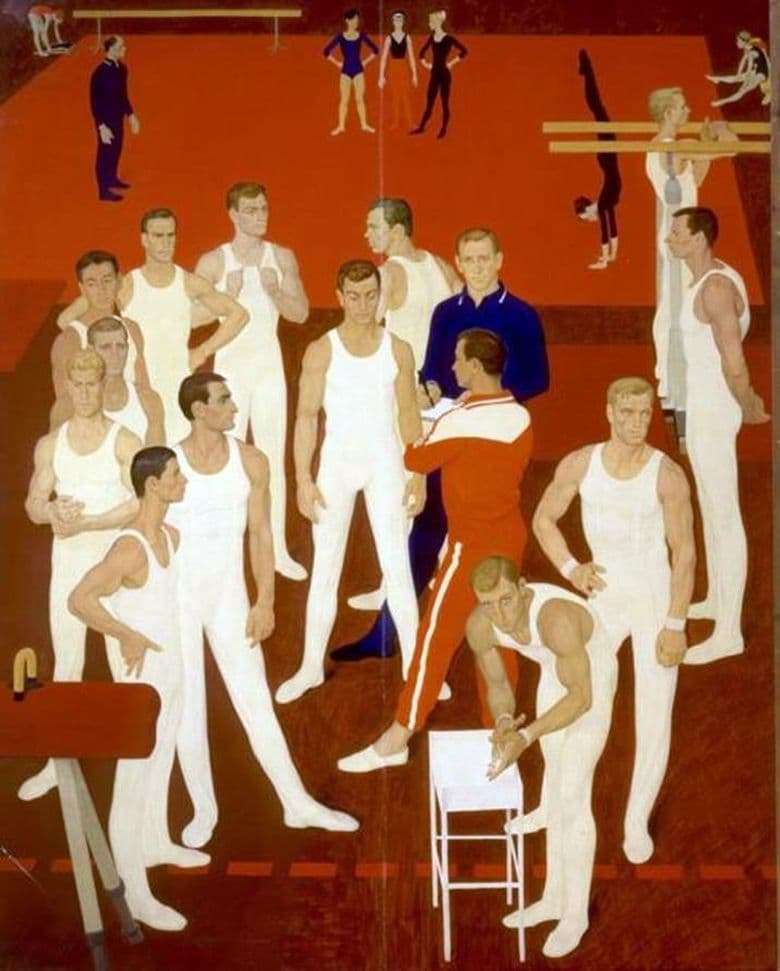 Group portrait “Gymnasts of the USSR” was made by Dmitry Zhilinsky in the period 1964-1965. The work of the artist is a decorative and monumental image in which the principles of depth and flatness are combined. The picture was made using the tempera pokkas technique, the use of which requires impeccable design. Thanks to the skill of the artist in the application of complex techniques, the active color combination creates a cheerful effect. Against the background of a saturated red color of the floor, the slender figures of gymnasts look particularly impressive.

The presented work of илиilina, as well as the others, is distinguished by carefully traced details and extraordinary fidelity. Thanks to the expressiveness of the forms, angles, gestures, emotions of the depicted heroes, the artist harmoniously betrays the spectators the spiritual qualities of the athletes. Such qualities of a human and champion nature as courage, perseverance, self-demanding are emphasized. The image personifies sporting prowess. Heroes of the picture are volitional, internally collected, serious.

The portrait composition is difficult built and dynamic, written by the master in spiral form. The portrait depicts real Soviet champions: Boris Shakhlin and Yury Titov, who later became the head of the International Gymnastics Federation, are on close-up, and the portrait of world champion Polina Astakhova is depicted in the background. Zilina clearly and subtly depicted the individuality of each hero of a group portrait. The composition depicts an individual setting of sports thoughts and feelings that can be seen in the faces of the characters. The images depicted give the viewer a sense of clarity and vigor.