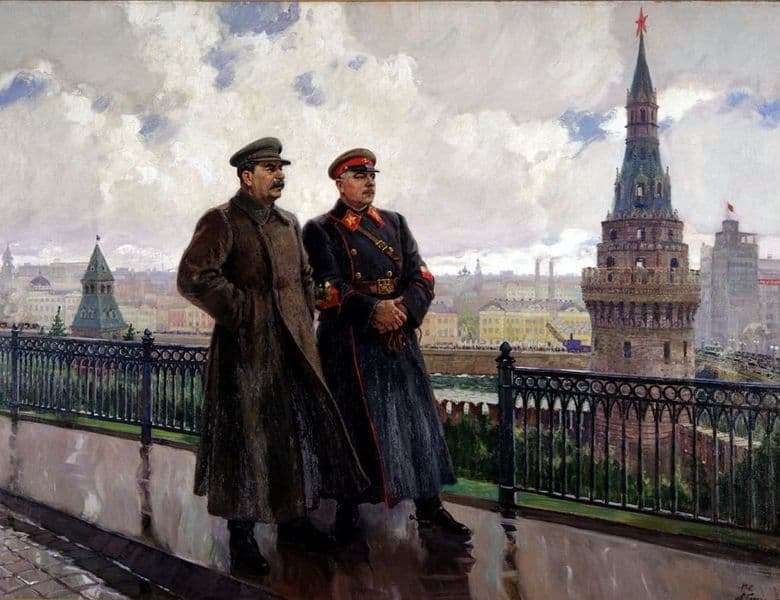 Artist Alexander Mikhailovich Gerasimov painted the picture “Stalin and Voroshilov in the Kremlin” in 1938. It was made specifically for the anniversary exhibition for the twentieth birthday of the Red Army and Navy. The exhibit was put on the most revered place in the center of the hall.

The composition of this picture is rather laconic. Voroshilov and Stalin stand on the Kremlin path against the background of Moscow streets under construction.

Both figures are depicted in the socialist genre. Namely, not exactly in the form in which they were in life, but more in embellished form. Many of the facial features of the characters in the painting, which the artist showed, have nothing to do with the real appearance of the main characters. For example, in life, Joseph Stalin had pockmarks, but they were not on the canvas. Gerasimov thus embodied images, not a living reality.

The ideological meaning of this work

lies in the fact that in the views of the protagonists, power and unbending freedom are transferred – under the socialist labor of the people of the USSR are the government, the party and the Red Army of the Soviet Union.

Drenched asphalt road stands in contrast with all the pathos of this plot. In addition, visually removes the official picture. The artist intentionally brought the heroes closer to simple human conditions. Rain brings in not only this meaning, but also another. It means the renewal of being, which will soon lead to a new and improved future.

The picture was made to order. The task for the artist was to write a portrait of Stalin – the leader of all nations and the best friend for all children. But the artist decided not to dwell on the idea of portraying only one Stalin. Gerasimov decided to portray Voroshilov as a statesman next to Joseph Vissarionovich. Not just because Gerasimov decided to take such a step. With Voroshilov, he had a friendly relationship.