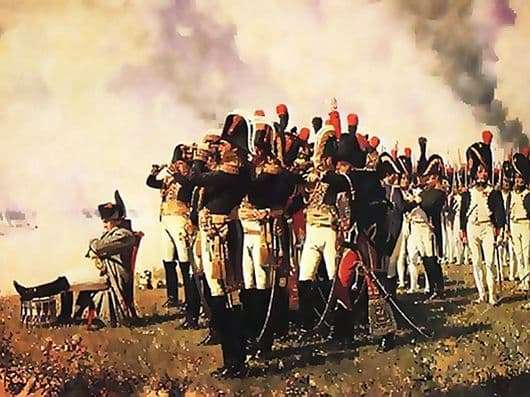 Vereshchagin executed a picture called “Napoleon on the Borodino Heights” where he wrote Napoleon and his retinue. All officers are dressed in full dress uniform, and this is not without reason, much can be explained by the historical background of this battle. Napoleon understood that this battle would be decisive, based on the fact that he was sure of his victory, ordered the staff to be at the parade. The master has created a fairly large number of similar paintings, where he impersonalizes Napoleon, as a great commander.

Napoleon is sitting on a chair, frowning and staring into the distance. With all his appearance, he shows that he is the head of the whole army of France, his left foot lying on the drum. The master creates a special contrast between the “great” commander and ordinary soldiers, generals and marshals, this becomes visible thanks to the indifferent look of the leader and the agitated faces of everyone else, who stare into the distance with a sinking heart so that, decide the outcome of the company.

The master, most likely, specially ironically described the inability and weakness of Napoleon, against the background of his strong and fearless army, who animatedly gossip about the upcoming battle and everything that happens. The commander’s weakness is most likely due to his personal weakness, rather than his inability to resist the great Russian army.

Even so, the commander sent his army into battle, and now he has such a doomed look. And even the position of his body speaks volumes, this leg, which is on the drum, can only say that the French drums have already tapped their own.

Apart from the fact that the master has delicately drawn the visible storyline, it is worth paying attention to some details that are present in the uniforms of all warriors, the perfect drawing, every detail creates the necessary atmosphere of naturalness, which may indicate a high level of approach to the work.