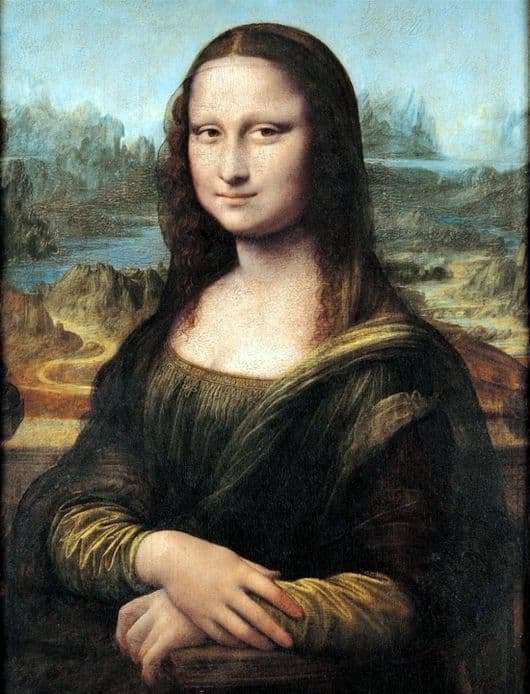 The picture presented in the form of a rectangular format shows an image of a woman in dark clothes. which is in the half-turn position. They sit in a chair, and her hands are folded together, one hand rests on the arm of the chair, and the other is on top of the first. The woman is depicted facing the viewer. The lying hair of a woman is divided by a parting and presented to the viewer in the form of smooth and flat, clearly visible through the transparent veil lying on them. The dress on the girl is green with thin assemblies and yellow sleeves in the clutches. The head is in a slightly tucked position.

When describing the painting, art critic Boris Whipper emphasized that the face of Mona Lisa reflects the fashion of the Quatrocento: Mona Lisa has shaved eyebrows along with hair on the top of her forehead. The lower part of the picture cuts off the other half of her body, and as a result, the portrait turned out in half In early times, the picture could have been broader in size and could accommodate a pair of side columns of the loggia, of which only a couple of column bases have remained today, xbm fragments are clearly observed at the edges of the parapet. The loggia leads to the desert wilderness in the presence of winding streams and lakes, which are surrounded by many snowy mountains that are visible behind all the figures.

The artist presented Mona Lisa in a sitting position against the backdrop of a beautiful landscape, and already at first glance the association of her greatly enlarged figure with a large mountain viewed in the distance and the landscape gives the image the presence of extraordinary grandeur. In addition, this image was promoted by the presence of a contrast in the form of an increased plastic tactile character and its smooth silhouette in the presence of going into the misty distance, similar to the landscape with the presence of bizarre rocks and prominent among them water channels. The portrait of the Gioconda has rightfully earned the title of the best example of the Italian High Renaissance in the portrait genre of the era.