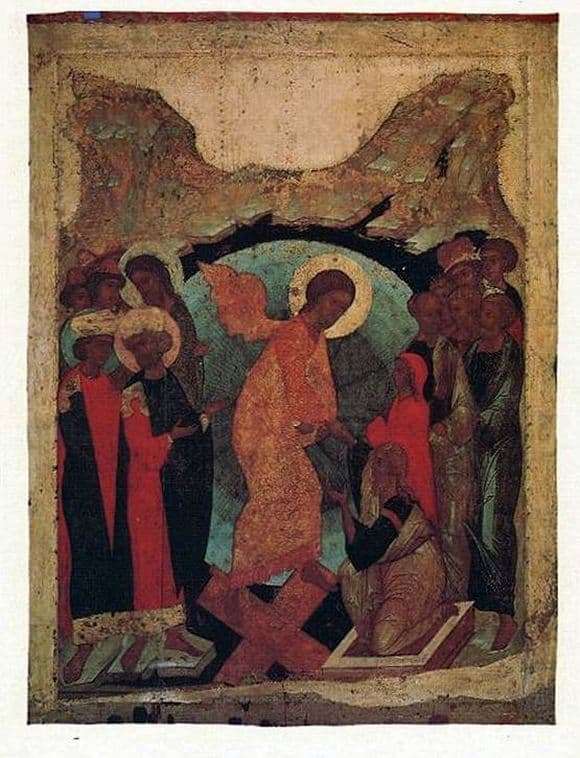 According to the biblical commandments, after his death, Jesus went to hell and smashed the gates that held everyone who was there. He came there to allow the prisoners there to rise with him. After all, according to the canons, hell is evil, and not only the souls of sinners, but also some of the righteous fell into his power. And Satan himself deceived himself, because he could not find out who had come to destroy his castles. At the feet of Jesus is depicted a cross on which he was crucified while alive. He brought it with him to hell. The picture is written on lime boards, but preserved to this day.

He meets here a great many people, most of whom are ready to go after him anywhere. He came to take them with him, and no one can stop him. He came down to destroy the last and most tragic place of stay of people. But he will not take away all of them, but only those who are willing to let faith in their heart, sincerely believe in the power of God and follow in his footsteps to the very end, to remain honest and faithful. When their lives become righteous, there will be an endless Easter joy.

Rublev’s paintings are distinguished by a detailed drawing of faces. People before Jesus bow their knees and heads, and behind the Savior’s wings. The whole picture is painted in bright colors, some people have black or red robes, and the rest of the color palette is calm. If you don’t know the place where Jesus went down, then you can’t say that there is a hell before the audience. The creator came there barefoot, and the man in the foreground, with whom he was talking, knelt before him and was standing on the tombstone.