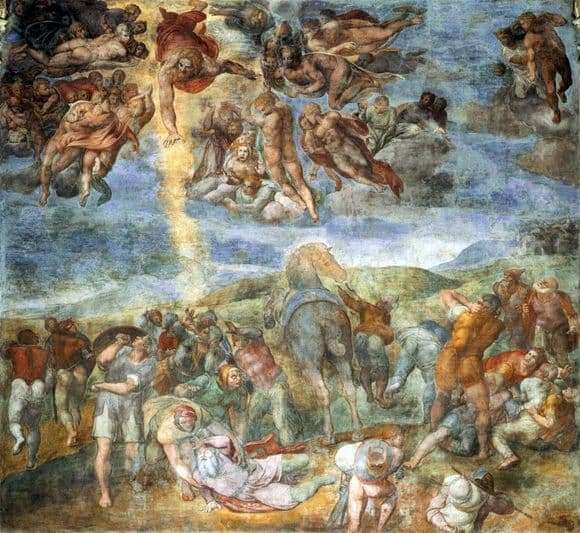 The penultimate work of the legendary artist and architect Michelangelo was Saul’s Appeal. The painting was made as a fresco for one of the monasteries. It consists of two parts. The first part shows Jesus Christ directing the righteous fire on the Saul squad. He is surrounded by half-naked angels who either consider his action or are removed on assignment. Some of them have scarlet raincoats on their bodies, others have green and turquoise dresses.

The second part of the picture shows a small detachment, in the midst of which Saul himself lies. The blow of Jesus knocks him out of the saddle, and he falls to the ground. His warriors wander who where. Some try to help him. Saul is a famous persecutor of Christians. His goal was to assemble a powerful force that would drive all Christians out of their land. Saul was merciless, and destroyed entire settlements of righteous people. But once, in one of his campaigns, he received a crushing blow to the head. There was no one nearby. But then he understood what was happening, since the voice of Jesus rang out above.

In the picture we see the surprised Saul, his eyes looking upwards. Jesus is looking at him from heaven, with angels on either side. The face of Jesus expresses anger, and the movements are aimed at the complete destruction of the detachment. But still, he gives Saul a chance. Saul’s squad wanders about who goes where. From the surprised faces depicted by Michelangelo, it seems that they do not understand what is happening. One of Saul’s faithful warriors grabbed a shield and sent it up in order to cover its commander. Some part of the squad fleeing. Without turning around, they run away from what is happening. On the right, you can see Saul’s horse running away, which his warriors are trying to stop. But they have nothing to do, and the horse just throws people in different directions.