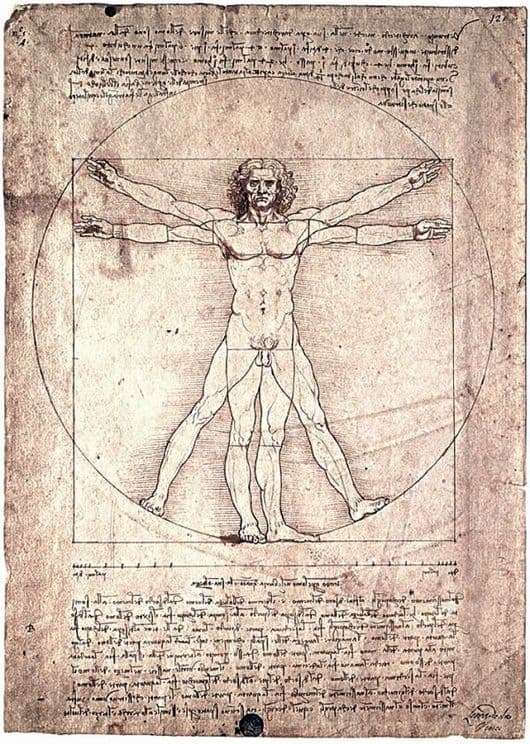 The picture of the Vitruvian Man is a work that was created by Leonardo da Vinci in the years 1490-92 as an illustration for a book. The book itself was devoted to the works of Vitruvius, and the illustration by Da Vinci was placed in her diary.

The figure clearly shows the image of a man’s figure in the form of two positions, which in different positions are applied one on another. In addition, arms and legs branched to the sides are clearly observed.

This illustration was called “canonical proportion”. The piece was made with the help of a pen, ink and watercolors in addition to a metal pencil, and the size of the drawing is 34.3? 24.5 centimeters. To date, this figure is in the Venice Academy. The drawing also gained the status of scientific work and works of art.

It is worth noting that the main feature of the drawing by Leonardo Da Vinci lies in the artist’s interest in proportions. Re-opening the mathematical proportions of the human body in the XV century, Da Vinci and many other scientists made a major achievement, which became the precursor of the Italian Renaissance.

In the study of the pattern, you can see that the combination of the legs and arms gives two different arrangements. A pose where the arms are separated to the sides and the legs are joined together distinctly inscribed in a square. And from a different angle, the arrangement with the arms and legs that open to both sides is in a circle.

If you look in more detail, you can see that in the form of the center of the circle is the navel of the figure. A little later, referring to this technique, Corbusier managed to create his own scale of proportions – Modulor, which could influence the aesthetic component of twentieth-century architecture. The figure is most often used as an implicit symbol with the internal symmetry of the human body and the entire Universe.