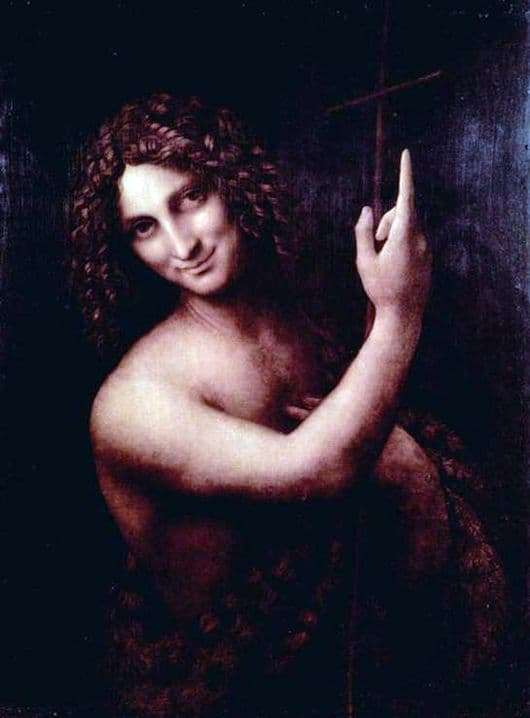 “John the Baptist” is a painting by Leonardo Da Vinci, an Italian Renaissance artist. This oil painting refers to the later period of the artist’s work and testifies not only to the creative decline of Da Vinci, but also to the end of the Renaissance era itself. This is clearly seen from the character of the image of John and from the fact that there is no familiar landscape in the background. “John the Baptist” was written at the time when Leonardo spent time in Amboise in Clu Manor, surrounded by honor and attention. But Da Vinci himself did not feel much satisfaction from his work. Moreover, he repeatedly drew and redrawed many of the paintings he brought with him.

Apparently, this picture is associated with the creative decline of the artist. The painting depicts a young man, with one hand facing the sky, and the second he presses a cross to his chest. The dark background contrasts surprisingly with the lighted figure of the young man, which gives the picture even more mystery and mystery.

Many critics and artists who came to Leonardo da Vinci admired his work, but the painting “John the Baptist” caused at least a considerable surprise among them. The resulting image was too different from the usual, canonical one. The young man depicted in the picture, with a challenging, ambiguous smile, did not look like a stern ascetic with a long beard. It is worth noting that such a smile was inherent in all persons in the paintings that relate to the late work of the artist. The painting “John the Baptist” bears in itself a certain ironic motive, which makes some ambiguous impression on the viewer, caused, in the first place,