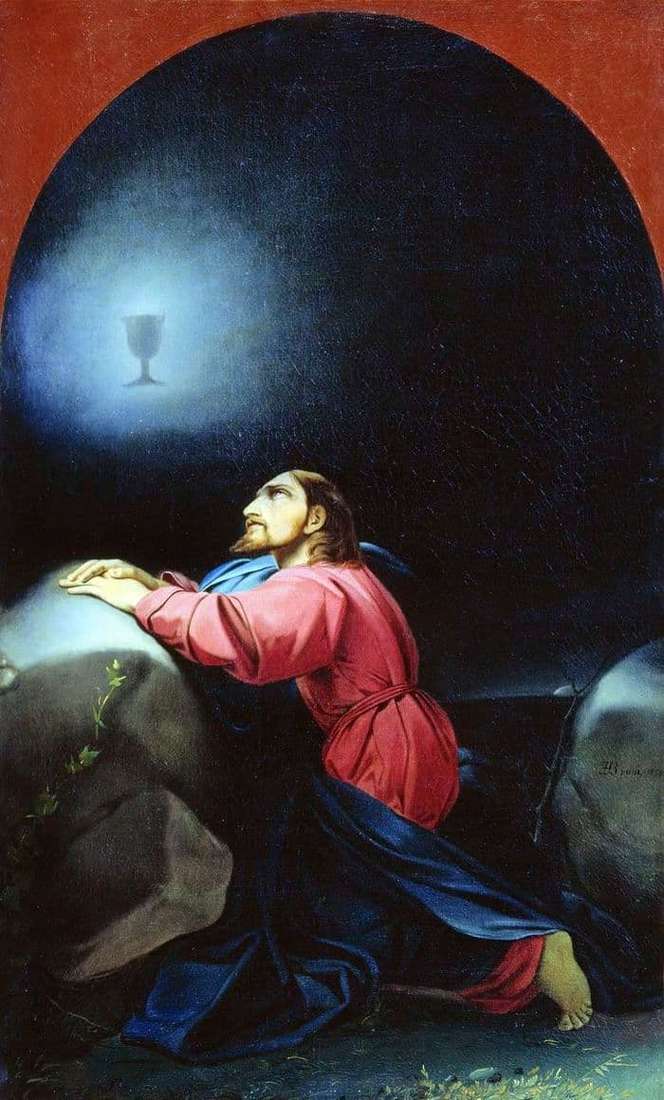 The painting “Praying for the Bowl” was painted by a Russian artist of Italian origin, F. A. Bruni, in Rome for the church on the estate of Senator G. N. Rakhmanov. The basis of the picture lay religious motives. To make the color scheme more saturated and expressive, the author used oil paints.

The canvas stands out for non-standard size, which probably refers us to the high stained glass windows of Christian churches. On it, Jesus Christ kneels before the sacred cup. He already knows what suffering awaits him ahead and what a painful execution he will undergo. His face full of grief and his palms resignedly folded one upon the other are illuminated with golden reflections, despite the dusk reigning around.

The clothes are painted in pure scarlet color, which also makes it stand out against the surrounding darkness. Jesus is like a light in darkness, a messiah, the last hope of a world steeped in its own sins, and the author emphasizes this with numerous artistic techniques.

In turn, the bowl, in contrast to the central figure of the picture, is depicted not so clearly. She is a ghostly, bestowing a subtle light. For Jesus, the only hope remains the realization of his mission, which will help him to accept the hard fate and betrayal of one of the disciples.

In his picture, Bruni used many techniques of academic drawing and achieved a holistic, well-constructed composition. The picture became so famous that several times other great masters redrew it. The repetition of this work of art is still in the church of the Academy of Arts.