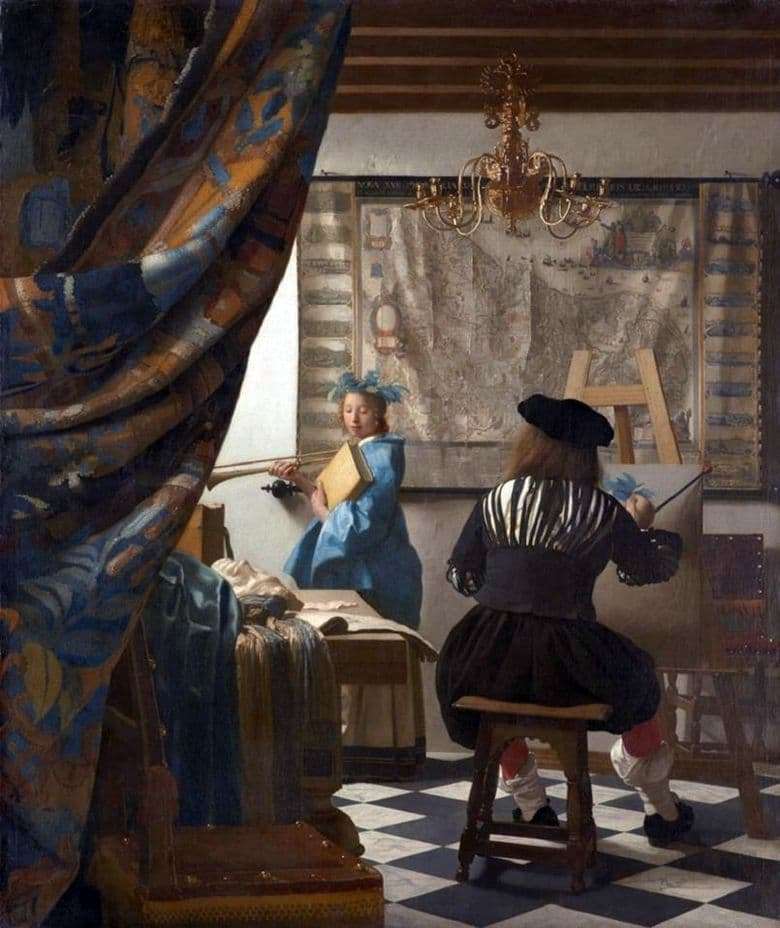 The painting by the Dutch painter Vermeer bears other names as well. Such as “Artist and Model”, “Allegory of Painting” and “Art of Painting”. Size 130×110 cm. Painted with a mixture of protein and oil on canvas around 1667.

The picture can be easily attributed to the Golden Age of painting. At that time, religious themes began to change to secular ones. This is one of the most recent, and concurrently large works of the artist. It is unique in its allegorical meaning.

The composition is organized in such a way that the first thing that strikes is the slightly slightly open curtain. Such an idea allowed the view to flow smoothly onto the drawing artist, and then to the posing model. Thus forming a kind of triangular movement.

The vertical and horizontal rhythms that are formed due to the workshop itself and the wall protect against the excessive dynamism of the picture. Also the

map of the Netherlands from 1636 acquires a horizontal view. On it Vermeer depicts a crease. And it turns out not to be in a random place, but precisely where the lands were divided into two parts.

The candelabrum, which is surmounted by a double-headed eagle, bears in itself an allegory of vision – precisely that very feeling of the five that it matters so much to the artist.

And the model, in turn, is interpreted as the muse of history in ancient Greek mythology – Clio. And the one that she holds in her hands, was deliberately depicted the reverse side for the viewer. Now this gesture serves as a definite message from the artist as a future interpreter.

The presence of a considerable number of significant components, like a model with all its historical features, a map from the distant past, the coat of arms and the outdated clothing of the painter, make it possible to speak about the praise of painting as the most important of all arts.

Today, the painting “Artist’s Workshop” is located in the capital of Austria – Vienna, in the Museum of History and Arts.