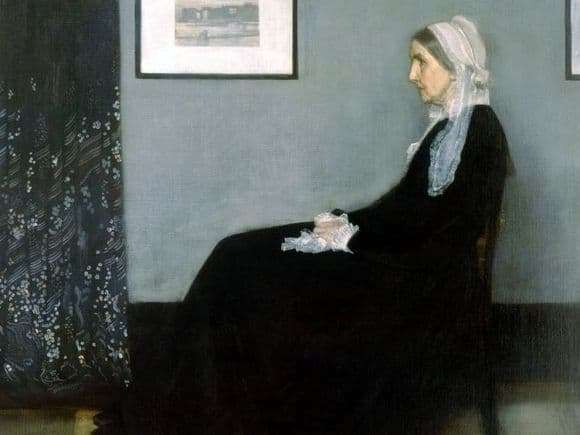 Mother’s Portrait is one of Whistler’s most recognizable works. Currently the canvas is kept in the Orsay Museum in Paris. Portrait painted in 1871. The first exhibition in which it could be seen by the audience was held in 1872 in London. As you might guess, the portrait depicts the painter’s mother, Anna McNeill Whistler. The canvas is imbued with a deep psychological insight.

The crooked dark figure of an old woman stares at one point, sitting on a chair and hands folded in her lap. She is dressed in a black dress to the floor, with a light cap, in her hands she is squeezing a scarf. Not only the heroine speaks to us, but also the environment: the curtains, the picture on the wall are worked out to the smallest detail.

There is no single version of the painting. There are two options: either the mother of the artist had to become a model from the very beginning, but she posed while sitting, since she could not stand. Or another option: initially, in its place, there should have been a completely different model, at the last moment refusing to pose for Whistler, and then he invited his mother. What is the meaning of the picture? For a long time it was believed that the picture is a symbol of the so-called cult of the mother, but Whistler himself did not want that. He wanted his works to be evaluated primarily for the form and only secondly for the content and the meaning behind them.

Once, arguing with Reskin, who criticized his work, Whistler said he wanted to get a fee not for the two days he spent writing a picture, but for the time he spent working and learning his skills and skills. What is curious, “Portrait of a Mother” has repeatedly appeared in various films and TV shows, and even cartoons: the well-known TV series about Mr. Bean, in separate episodes of The Simpsons,