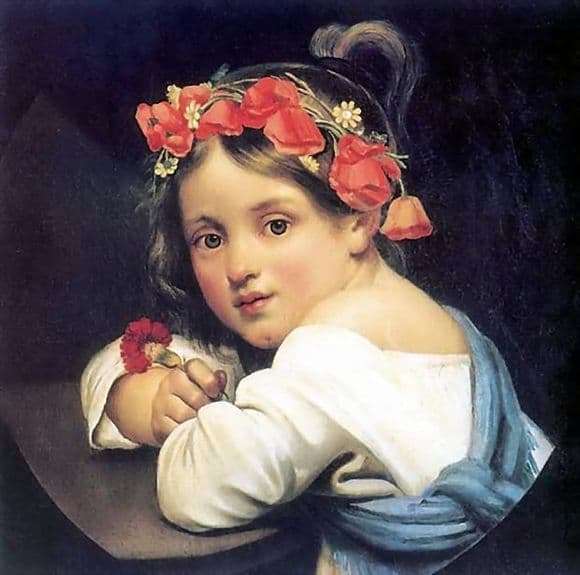 Orest Kiprensky wrote this whimsical portrait in the first half of the 19th century, or to be more precise, until the 20th year. The work had at various exhibitions and to this day has several names, the most famous of which is “A girl in a poppy wreath with a carnation in her hand (Mariuchcha)”.

The canvas is written so realistic and so beautiful that when it was exhibited in the Italian city, local experts did not believe that the girl was depicted as a Russian artist, they say, the Russians cannot work such a miracle. One can imagine how insulting and unpleasant Kiprensky was!

In the most famous name of the painting, voiced above, the name Mariuchcha is indicated in brackets. Who is this? This is an Italian girl, Anna-Maria, whose mother was a model and had not only professional connections with the artist.

Once a model was found dead. One of the suspects was the unfortunate artist. At the last began the strongest persecution that spread from Italy to France. Orest wandered and hid, having previously asked to settle an orphan in a monastery.

After a while, when Anne-Maria was already seventeen years old, the artist, who was under fifty, married her. She did not love him, although she appreciated his care and work (including her own child portrait). He adored her and was engaged not in the art to which he was called; I did this only in order to have a lot of money in the family in order to provide my spouse with smart gifts. From such a difficult life, the master began drinking heavily and soon died.

After the death of the wife, the widow sold his paintings, even this wonderful portrait (Mariuchcha sits, turning a curious face to us viewers: she asked some question and expects an answer), not wanting to keep it in memory of her husband (which proves her dislike of the latter).