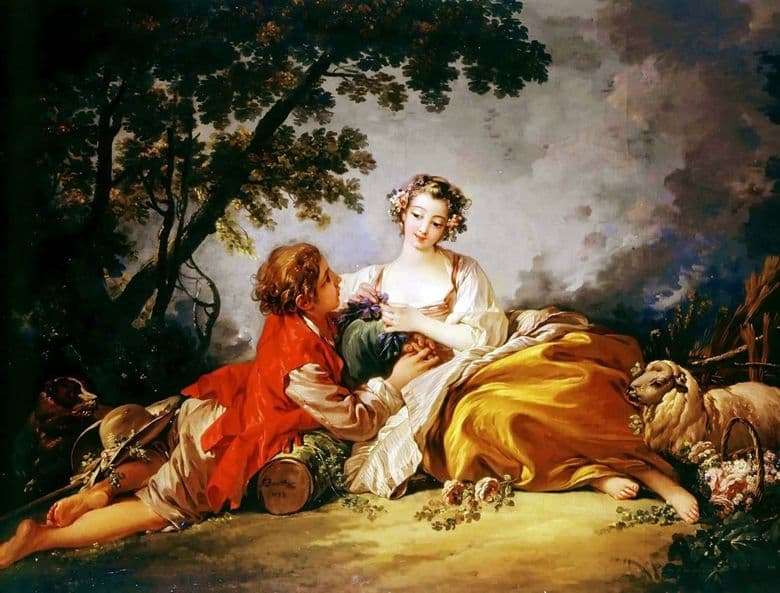 Francois Boucher became famous not only as a talented artist, ideally corresponding to the spirit of his time, but also as a decorator and author of engravings. Illustrated many books. Most often he turned to mythological plots, but he painted them in a pastoral vein, partly decorative, showing rare ingenuity. In addition, he paid tribute to genre scenes, wrote portraits to order. The brightest representative of Rococo, the artist sought to ensure that all his works fit perfectly into the interior and served as an additional decoration of the premises. His main customer was the Marquis de Pompadour.

The painting “Pastoral” is a typical example of Bush’s work. Bright, as if varnish paints form the basis of a pictorial work. The artist uses all the colors of the spectrum, without exception, but the general subtone of the painting is golden-pink, creating a feeling of warmth and light flirtation. The concept of “pastoral”,

derived from the word “shepherd”, is based on the chanting of the countryside, idealized being, conflict-free coexistence against the backdrop of nature.

Bush almost all of his pastoral filled with open flirting and partly even erotic. The canvas depicts a couple in love – a pretty girl in a lush yellow skirt and a pale pink blouse with a large neckline, and her lover, dressed in beige pants and a bright scarlet vest. Both characters are barefoot; Flowers are woven into the girl’s hair, and the roses are lying at the feet of her lovers. To the right, a curly sheep clung to the girl, the scene framed picturesque tree branches. The light gray, silvery sky serves as a neutral tone for the embarrassed, flushed face of the heroine. Today, such a plot and the degree of seriousness of its execution can be a subject for surprise; in times of Bush, the savory artificiality of the situation was the most familiar and typical scenario for the picture.