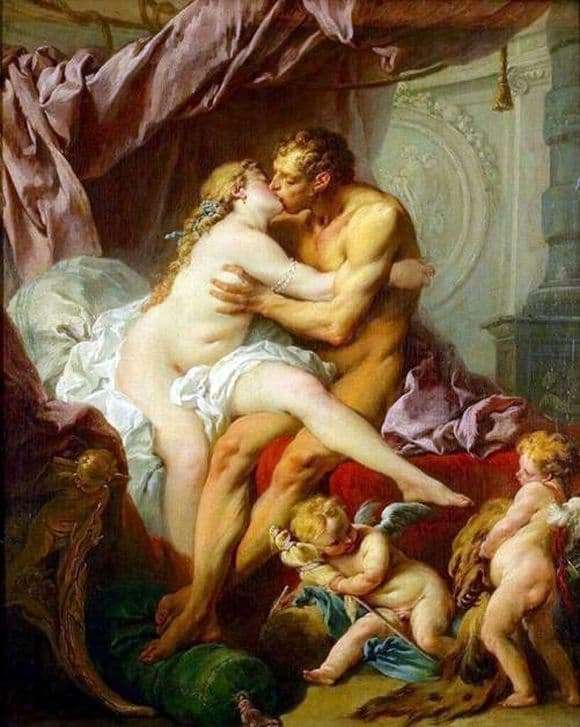 The canvas “Hercules and Omphal” is painted by French painter Francois Boucher, a prominent representative of Rococo and one of the most beloved artists of King Louis XV. The painting was written in 1735, it is considered one of the earliest works. Located in the Pushkin Museum of Fine Arts in Moscow.

The basis for the canvas was the myth of the son of Zeus and the earthly woman – Hercules. Trying to perform one of the 12 entrusted to him feats, the hero finds himself in slavery by the queen of the Lydian kingdom – Omphalos. Such a terrible punishment becomes a punishment for the murder of Ifit, the son of Evrit. The Herald of the Gods is Hermes, giving Hercules under the protection of Omphalos for exactly 3 years.

The enchantment of the beautiful queen does not leave Hercules indifferent. The young hero gives her his heart, losing the desire for feats and the inherent belligerence. A man decides to stay at home, which for him was the kingdom of Omphale and therefore puts on women’s clothes. Omphala removes him from hard work, forcing him to sit at the spinning wheel, or to help slaves. In a love union children are born, later they become the first kings of Lydia.

For many centuries, Omphale was identified with the goddess Astarte, or Aphrodite-Urania, combining the femininity inherent in the weaker sex and the features of a real warrior.

When painting the canvas, bright colors were used to fully convey the passion that was simmering in the hearts of young people. The characters are well lit, which allows us to consider the smallest details of naked bodies, ideally prescribed by the artist.