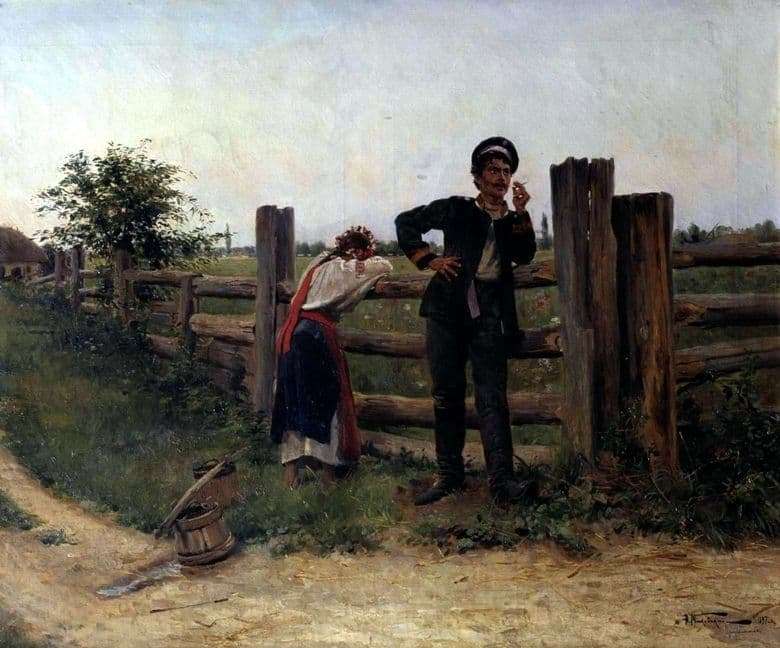 Oil on canvas, date of creation – 1897 The work can be seen in the Odessa Art Museum.

The artist was distinguished by a rare skill – he turned a case from everyday life into a fascinating plot in his picture. Observation, the ability to notice the small characteristic details characterize all the work of Alexander Makovsky.

The author depicted a genre scene from life – a meeting between a guy and a girl on the outskirts of the village. The action takes place in Ukraine – the girl’s head is decorated with a traditional national wreath with wide color ribbons. Her outfit (long shirt with wide sleeves, casual skirt – yoke, tied with a wide belt) also gives the place of the meeting. In the left part, almost on the border of the canvas, another Ukrainian “sign” is noticeable – a squat hut, instead of a roof covered with straw. Rare trees in the distance, a lonely bush near a rare fence is a typical picture of the boundless Ukrainian steppes.

The guy with his appearance evokes associations with a famous literary character – Grigory Melekhov. The same darkness, forelock from his cap, mustache. The girl’s face is not visible, her mood can be judged only by the depicted pose.

Between the characters there was a tiff.

The male figure expresses irritation and self-confidence – the guy lit a cigarette, turning away from her friend, probably waiting for her to leave. He is not in a hurry, leaning his elbow on a log, waiting for a violent maiden reaction behind his back. His attitude to the experiences of the recently beloved girl is clearly conveyed by indifferent facial expressions.

The girl is harder going through what is happening – she leaned on the hedge logs, bowed her head. Rocker, buckets of water splashed lonely thrown on the road. Perhaps, the sadness is expressed by inconsolable tears (isn’t this why a young man is so annoyed?), Lamentations. However, we can assume, and quiet bitter sobs – she still hopes to soften the guy, to return his location.

The picture makes you empathize, compose the end of history, admire the unsurpassed mastery of the artist in depicting life in all its manifestations.