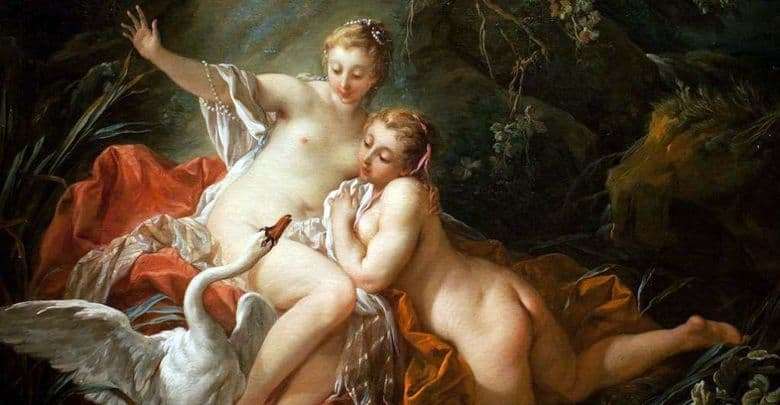 Francois Boucher was perhaps the most prominent representative of the painting of the French Rococo era. The artist won numerous awards during his lifetime and was “his man” at the court of Louis the Fifteenth, whose portraits of the favorite, the famous Marquise de Pompadour, painted many times. The artist’s talent is multifaceted; he painted canvases, painted backdrops for the theatrical scene, created prints; engaged in painting on porcelain, painted fans and made sketches for fabrics. But the most vividly Bush’s talent manifested itself in painting, in depicting mythological and biblical scenes. Pastoral landscapes and ancient buildings, which did not exist in reality, always served as a backdrop. Mythological painting Bush sought to give the look of painting on porcelain. In these works he used many bright colors, but the general tone led to a sparkling pink-golden gamut, decorative and festive. All the characters of his genre scenes are sensual, colorful and frivolous.

The plot of Leda and the swan is a classic story of the seduction of a young woman, the wife of the Spartan king Zeus, who took the form of a large white bird. As a story, this legend was very popular both in art and in literature. Sculptures and mosaics depicting Leda and her winged friend have been preserved since ancient times. At the time of Cinquecento, the plot became especially popular; paintings on this subject were painted by Michelangelo, Leonardo da Vinci, and Caravaggio. In the interpretation of Bush, the scene takes on a carnal, erotic sound; Leda’s body looks earthy and sexy. At the same time, the French author performs the canvas with his inherent ease – frivolous and glossy, it does not cause any particular base associations.

In the painting “Leda and the Swan”, a white bird, having bent a thin neck, tensely reaches for a beautiful naked woman. Leda looks at the swan with coquetry and lust. Such frivolous images “on the edge of decency” were extremely fashionable at the time; rich people bought them to decorate interiors.

There is an opinion that Bush specifically wrote his works in such a way that they fit perfectly in color to any interior, in harmony with tapestries, furniture and porcelain. The saturated blue and green colors of the background are diluted with a soft glow of body-pink and gold in the image of the bodies; in the feathers of the swan are visible lilac reflections. The folds of the curtains are written in rich scarlet and ocher yellow. The bodies of the beauties are drawn in accordance with the fashion trends of the time – lush, plump, earthly, with an abundance of small folds. At the time of Rococo, only this type of body was considered beautiful.