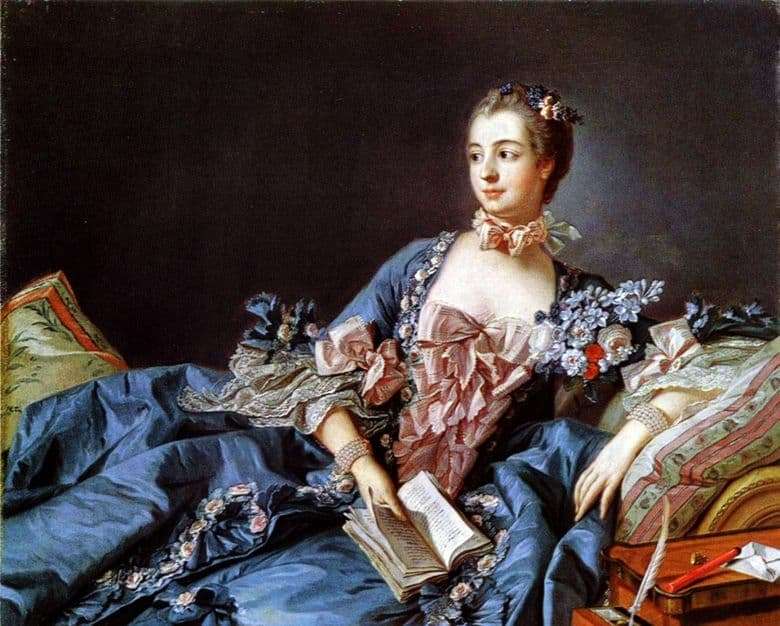 Francois Boucher is a very versatile French artist. The basis of his work consists of paintings with mythical and biblical scenes; he also liked to depict the daily activities of the people of Paris and pastoral scenes, often taking portraits. The favorite of Louis the Fifteenth, the Marquis de Pompadour, was his devoted admirer and girlfriend; Boucher was engaged in decorating her residence and wrote several ceremonial portraits of the Marquise. The real name of the Pompadour is Jeanne-Antoinette Poisson. For almost twenty years, she had a great influence both on the king and his decisions, and on government affairs and the life of the kingdom. The king gave Jeanne-Antoinette the Pompadour estate and granted the title to the Marquise, after which she received an official divorce from her husband.

Painting was the subject of a special passion of this woman, she set the fashion for the whole of Europe, her name was called hairstyles, interiors, costumes. Favorite style favorite was Rococo, and she patronized not only Bush, but all the representatives of this trend. Francois Boucher always wrote to the Marquis in silver, blue and olive green tones. Apparently, he did not aspire to the exact portrait similarity – in the portraits of other artists, de Pompadour looks a little different, rougher and tougher. Boucher idealized and partly deified his patroness and girlfriend, reproducing the fashionable standard of female beauty at that time – a doll-like porcelain face, huge almond-shaped eyes, a small nose and a small, plump mouth, a capricious facial expression. Jeanne-Antoinette herself often noted that Bush paints her “very beautiful, but not very similar.” All images of the Marquise are different from other portrait works of the author – they have some intimacy, intimacy, and partly sensuality. However, he almost always depicted the king’s favorite in the same position, often with a book in hand – only the outfits changed. The faces in the portraits are also almost the same – it feels like a woman has not aged at all for more than ten years.

The most famous portrait of the Marquise de Pompadour is in a blue-green dress with a slight silver tint, decorated with pale roses. The marquise is reclining on a striped couch, looking thoughtfully into the distance, in her right hand is an open book. There is no doubt that Jeanne-Antoinette’s dress is the quintessence of fashion of that time. Pink with silver lace, a bow around the neck of the same delicate material, multiple strings of white pearls on the wrist, flowers in a neat hairstyle. The marquise looks a bit pretentious – many in Paris laughed at her petty-bourgeois manner of dressing, but surprisingly, it took several months – and again copied her style.

Boucher perfectly conveys a sense of purity and freshness, emanating from de Pompadour. It was the Marquis who in France introduced the fashion to wash almost daily – until that time, the ladies had muffled the unpleasant smells of their own body, pouring perfume from head to foot. The aroma during the balls was terrifying. The favorite of the king was fragrant with roses, which compares favorably with other women – and gradually the fashion of daily washing on the spot struck down the whole of Paris. On this canvas, the Marquise is depicted as confident and calm, slightly thoughtful and dreamy; despite some well-known flaws in realism, the artist managed to grasp the essence of her character. It is thanks to these features of his nature that the Marquis actually ruled the country for two decades, giving the king the opportunity to endlessly have fun and celebrate.