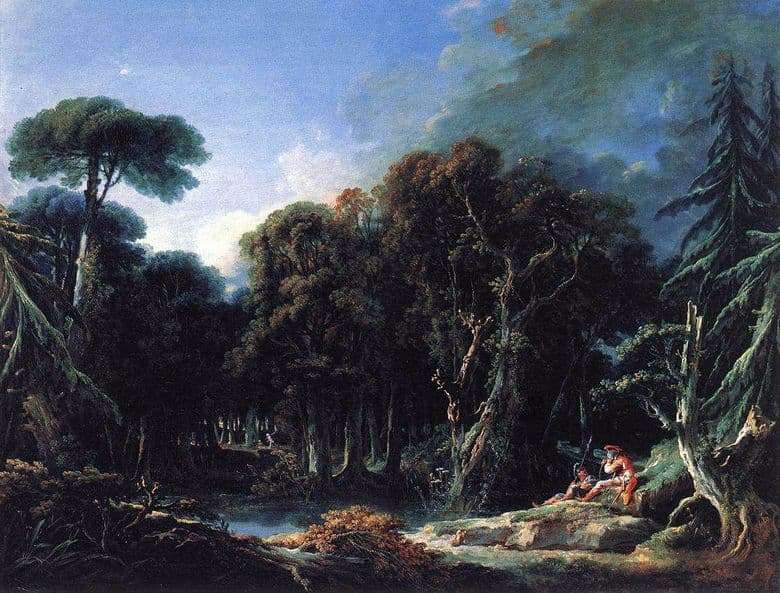 Painting by Francois Boucher “Forest Landscape with Soldiers” was written by him in 1740.

It depicts two soldiers on the river bank in the middle of the forest. The picture is very realistic due to its clarity and detail.

The trunks of the trees have a grooved bark structure. Foliage and needles on the branches of trees have natural green colors. The tops of massive trees stretch upward to the pale blue sky.

As for the sky, the artist depicted it bright blue with the complete absence of clouds. On one side of the canvas, a small accumulation of clouds smoothly swims along it.

On the far bank of the river there is a forest. The roots of the nearby trees seem to be buried in the river and flow into their reflection. On the near shore, on a hill, two soldiers are depicted.

They are engaged in conversation, and their weapons are piled up side by side, which makes it possible to judge their vacation

on the shore rather than their belligerent attitude.

The relief of the coast has clarity, in writing his artist used a wide palette of pastel shades.

The main accent of the paintings are massive trees and a river, with a mirror image of the sky and the forest. The viewer seems to be buried in the reality of the depicted landscape. Mixed forest, as if transmitting the noise of foliage, and the river attracts with its coolness.

Frasoua Boucher is not just an artist, he is the brightest representative of the Rococo era and was not limited to painting. His work is so diverse and multifaceted that it is difficult to limit himself to the characteristics of the color palette he uses and his views, in which he writes images in paintings. He emotionally conveys what he considers it necessary to display on his canvases. So the picture “Forest Landscape with Soldiers” is depicted in an interesting perspective.

Currently, the picture of Francois Boucher “Forest Landscape with Soldiers” is in the Louvre Museum in Paris.