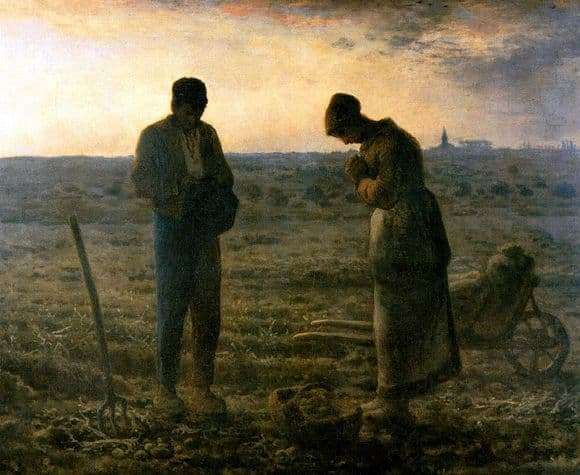 “Angelus Domini” is the name of the Catholic prayer, which is read three times a day – in the morning, at lunch and in the evening. The bells on Catholic churches in the old days called on believers to pray, and three times a day both cities and villages were filled with a festive bell ringing. He recalled that the Lord loves everyone, and that it would be good to thank him for the fact that the earth gives birth, for all being healthy and for the sun rising every day and never cease to rise in the future.

The picture shows a field at sunset. The sun has already set below the horizon, and the sky is burning with a red flame, against which the silhouette of a distant church in the village is very clearly visible. From her, it must be very audible in the evening village silence, the bells are ringing, calling upon all believers to pray.

The peasant and his wife on the field, hearing this sound, stopped work. The man stuck the pitchfork into the ground, took off his hat and awkwardly crumples it in his hands, head down. He is rude, he is accustomed to working in the land, he is far from the grace of pampered citizens, but his face (visible from sunset is difficult to see) expresses sincere faith. His wife put a basket on the ground and bowed her head too.

A woman does not need to remove the headdress – her hands are simply folded in front of her chest. Her face is almost indistinguishable – only the profile is visible against the background of a glowing sky.

Next to the peasants is a car, in which they probably carried fertilizer for crops. The green sprouts around the potatoes – if everything goes well, the harvest will be good.

It is about this – that there was a good harvest, that there was no drought or long rains – they pray, interrupting their work simply, casually, without the slightest protest. This is a familiar ritual and it even calms.

Interestingly, when conducting in-depth studies, an early layer was discovered, from which it can be understood that the picture was originally supposed to depict the funeral of a baby.