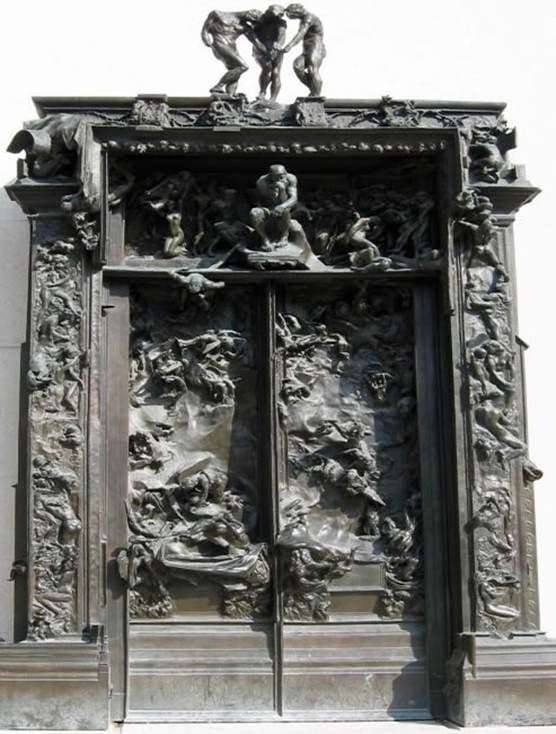 Auguste Rene Rodin – an innovator, impressionist sculptor. For Rodin, it is important to reproduce feelings, impressions in sculpture, to reflect the real world, its variability and mobility. Received in 1885, an order from the government to manufacture the gates of the State Museum of France, Roden set to work three years later, but he did not finish it. He could be called the work of a lifetime, which today occupies a well-deserved place in the Rodin museum.

The idea of ​​Rodin is amazing and non-standard. He admired Dante’s “Divine Comedy”, who managed in word to convey life after death. Rodin put the power of thought and skill into the sculpture, creating unique “Gates of Hell”. The composition consists of 108 figures, many became separate sculptures. Most of the figures in the composition are variants of human vices, which will certainly stand in front of the doors to the afterlife.

In the central part of the gate, we see the familiar “Thinker”, sadly looking down on sinners, making their way to the gate. Here the vices of mankind are flatterers, rapists, suicides, moneylenders. Each vice has its own place, there is not a single figure that did not bear the philosophical seal.

Rodin worked on the gates of twenty-seven years, but did not finish them, because life itself gave food for work. He constantly recombined figures, changed places, supplemented with new developments. As a result, the work was cast only after the death of the author, based on the last unfolded version. But who can say that Rodin would satisfy the option? Life made a choice for him.

The bas-relief figures show a new sculptor technique – emotionality. It is impossible to look indifferently at a work that seems to live and breathe. “The gates of hell” – fascinate, causing a lot of emotions: fear, surprise, admiration, disbelief – because everyone will ever appear before them.