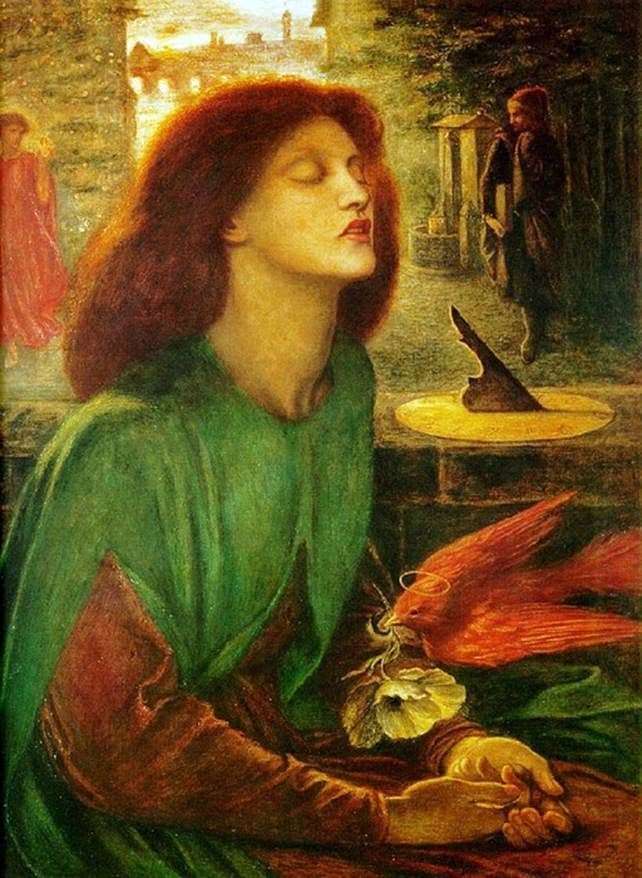 Dante Rossetti, like his famous idol-writer, had a beloved named Beatrice. This similarity was fatal. The girl, as well as the poet’s passions, did not have a long and happy life. She died at a very early age from taking in laudanum. The only significant and significant difference was that Rossetti was married to his beloved. A terrible tragedy happened to Beatrice back in 1862. The artist very hard experienced her death. He constantly insisted on an invisible connection with Dante the poet and his passion. It drove everyone crazy.

It is worth noting that during the life of his wife, he often depicted her in paintings. It could be completely different images, but after her death, everything ended. This picture has become a point of reference in the new stage of the style and manner of drawing Dante Rastretti. The picture he called “Beatrice blessed.” It is worth noting that for all his point on the beloved, the artist was not going to portray death as something bad, shameful or vile. Far from it, he has the end of mortal life – this is a kind of ecstasy. Pay attention to the girl’s face. It clearly does not appear clouded or full of suffering. True, death saves you from all suffering. It is a kind of spiritual transformation, the reincarnation of man. To this came his beloved.

Eyes Beatrice Rastratti portrayed closed, observing the rules of the ancient canons of the image of the dead. What can display the view of the dead, if he sees already completely different, directed to the otherworldly. The appearance of his wife is interesting: her hair is surrounded by an incredible light – it is a nimbus above her head, and an unknown bird lets a large and beautiful flower of poppy over her – a symbol of eternal sleep and finding tranquility. If you look at the background of the picture, we see that the artist depicted the sunset: the sunset of the day, the sunset of life… Isn’t it symbolic?