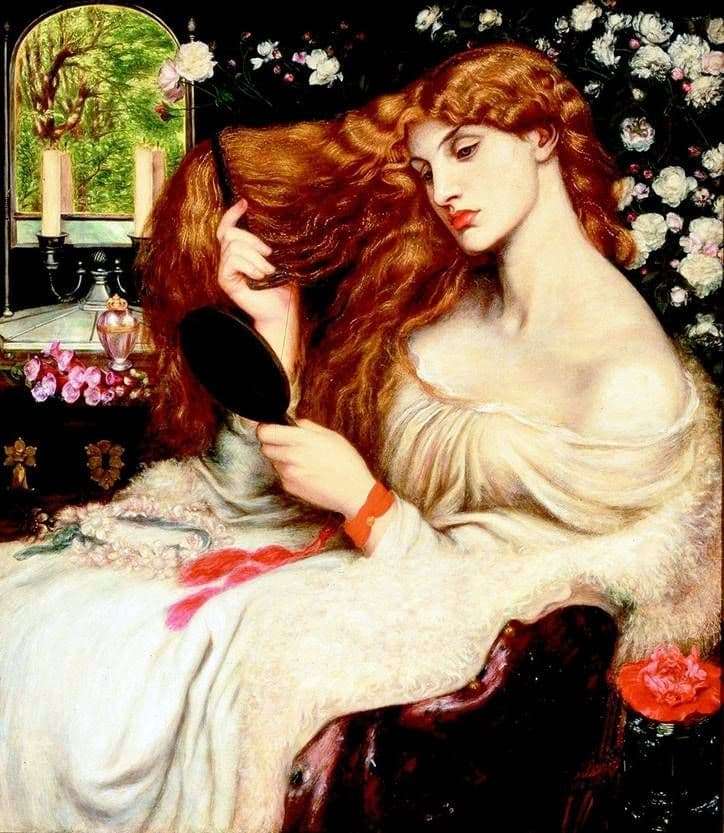 The work of the English artist Dante Gabriel Rossetti “Lady Lilit” was created by the author back in 19878. Work on the picture lasted as much as 12 years. During this time, the artist has constantly changed the models, and the picture had to be redrawn anew.

The author in his work portrayed the image of Adam’s first wife – Lilith. The painting depicts a beautiful, pretty girl who admires her image in the mirror. This is a modern interpretation of this image. Its prototypes were the favorite women of the author of the work. From one he took the face, hair, from the other – the body. Together we have an image of a beauty who knows her worth. It is a symbol of a woman who is always right, a secular lady who can show herself.

Lady Lilith symbolizes a strong woman dominating over a man. She is also dressed in a free robe, which was also done for a reason. Her clothes mean the freedom of a woman

In the background is a bouquet of white flowers. These roses symbolize sincere and pure love in the picture. There is also a flower in the foreground. This is a red poppy – a symbol of sleep, oblivion. Near the mirror are foxgloves, which mean insincerity. Opposite images attracted masters of painting of that time. They tried to paint their paintings, bypassing all kinds of canons.

A beautiful woman sitting behind the toilet looks menacing, angry, but strong-willed. The attention of the viewer immediately attracts her blond, long, luxurious hair. They symbolize immense sexuality, and even profligacy. Often they were credited with powerful force and power.

This mythological painting was created with watercolor, gouache and oil. At the moment, the picture is in the Art Museum of Delaware.

The simplicity, clarity and sincerity of the image – this is what fascinates this picture not only of the viewer, but also of other artists.