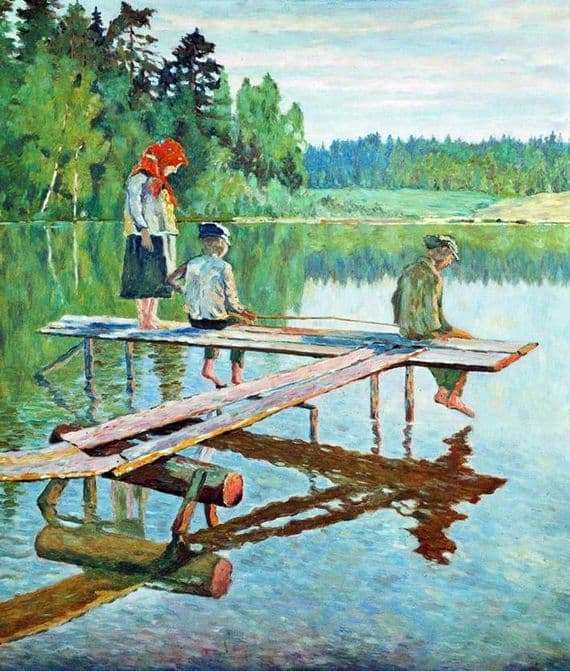 Bogdanov-Belsky is a Russian artist, who preferred genre scenes, usually from the life of peasant children, as well as portraits and samples in impressionism. He traveled a lot, he was chairman of the Kuindzhi Society.

“Evening” – one of his works on the life of peasant children. She depicts a simple scene – three children are fishing in the lake, sitting on the footbridge. This and entertainment, and help in the household. True, only one boy catches – perhaps they have only one fishing rod at all. He sits, his shoulders relaxed, the cap protects his head from the sun, one elbow is set aside – waiting and willingness to hook as soon as the float starts to twitch and dance.

The other boy sits by, staring dreamily into the water. He looks older, his legs almost touch the water surface. The pose is relaxed, he then admires his reflection, or hopes to see a fish swimming.

The girl is dressed in a skirt and blouse, on her head a red scarf, tied in the same way as the old women are tied. She stands looking at the anglerfish, and in her posture she expresses expectation and interest – either in this way she helps him catch fish, makes her peck faster, or tries to convey to the boy the idea that now it’s her turn to fish. All are silent, so as not to frighten the fish.

Silence is poured over the water, and over the silence – the sky, very similar to the sea. Trees aim at it, thin, elongated clouds that look like strips of cloth are floating on it. And at the same time the same tops and the same clouds float on the water surface, are reflected in it and become part of it.

The picture uses soft, light colors, light, in some places clearly visible strokes. It will be nostalgic, the desire to go into the wilderness, to the village, to fish, listening to the silence over the forest lake…

The fact that for three children everyday life, for the casual observer from our time – a dream, sometimes unattainable.