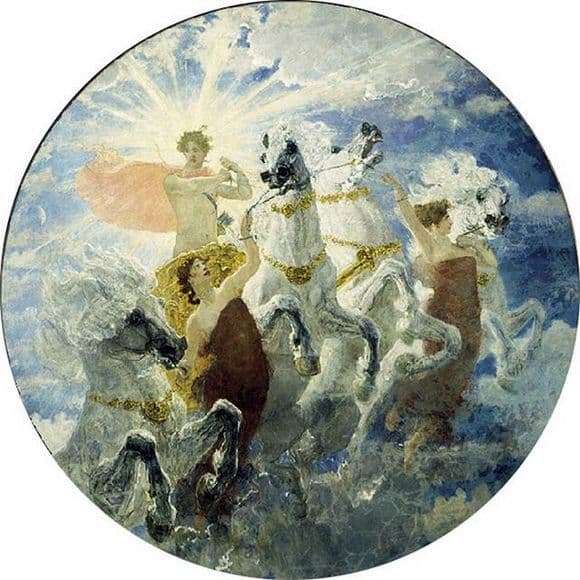 “Phoebe radiant” is a truly brilliant magnificent picture of the famous Russian painter Valentin Serov. By the way, the only example of painting the ceiling in his creative work. This work is an incomparable subject of admiration in the collection of the Tula Art Museum.

In 1887, Valentin Serov, then a young, little-known artist, was invited by landlord Nikolai Dmitrievich Seleznev to Arkhangelskoye village. The magnate entrusted him with painting the ceiling for one of the halls of his house. Information about whether the plot idea belonged to V. Serov, or his customer – no. The picture was painted on a round canvas with oil paints. In the center there is a golden chariot with Helios, the sun god sitting on it. He firmly holds the reins, ruling the four snow-white horses, gazing down to the ground – his possessions. His head is framed by a halo of rays piercing the sky and clouds.

One part of the firmament twinkles with stars – night reigns there, and the other symbolizes the passing day. The composition built clearly demonstrates the transition of the day as the sparkling chariot of the sun god moves. Two companions of Helios – the personification of the morning and evening dawn. Prevailing in the image – soft golden, blue-blue, pink, brown and gray tones form the airiness of an unearthly solemn procession.

Subsequently, Helios, another rarely used name for this picture, will be damaged due to the manor fire in 1905. The rebirth of her will give the artist Igor Grabar. In 1925, the canvas will be delivered to the Tula Museum. A few years later, finally, being in 1948 in Moscow, the work passes a full-fledged restoration in the National Art Workshop.

In Tula, the legendary work will be returned after 9 years. Today, the picture, as in the distant past, attracts the eyes of visitors, fascinating with its truly “radiant” beauty.