Home ⇒ 🎨Serov Valentin ⇒ Description of the painting by Valentin Serov “Portrait of the artist F. I. Shalyapin” 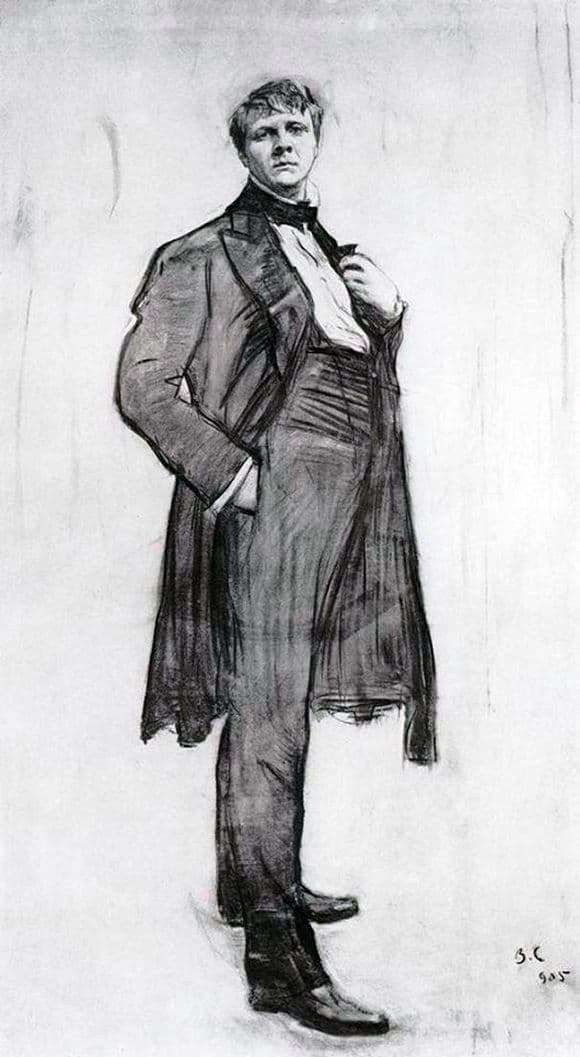 Fedor Chaliapin – an outstanding opera singer, who lived in the early twentieth century. Valentin Serov – a great artist of the twentieth century. It is not surprising that these individuals were given to meet. Serov often depicted bright, talented people in his portraits. In his work there are portraits of Maxim Gorky, Levitan, Repin and Leskov. Serov could not also miss the opportunity to portray on the canvas Chaliapin.

The portrait was painted in 1905. This picture is significantly different from the usual portraits of Valentin Serov. First, Fedor Shalyapin is depicted in full growth, this artist wanted to show the physical grandeur of this interesting person. Secondly, the picture is painted neither in oil, nor in watercolor, nor in pencil. The portrait is made of charcoal. And at first glance it may even seem that this is an unfinished work, and a sketch. Chaliapin in the portrait depicted as a truly majestic man. He is wearing a full dress. White shirt, bowtie, patent leather shoes – everything looks perfect.

Fedor Chaliapin’s pose is liberated, it is clear that he is not straining, but at the same time we see his proud posture and confidence. The body itself seems slightly disproportionate. A small head, large shoulders and long legs, but this is how I wanted to portray the singer Serov. The artist worked on his face, it turned out very expressive. The slightly sad expression of the hero’s face as if tells us that the singer is going to perform a lyric song. The portrait looks very simple, but it is considered one of the most beautiful and accurate portraits of Chaliapin. The picture absolutely has no background. Serov did not want to portray Chaliapin anywhere in a restaurant, on stage or in a house. And it turned out