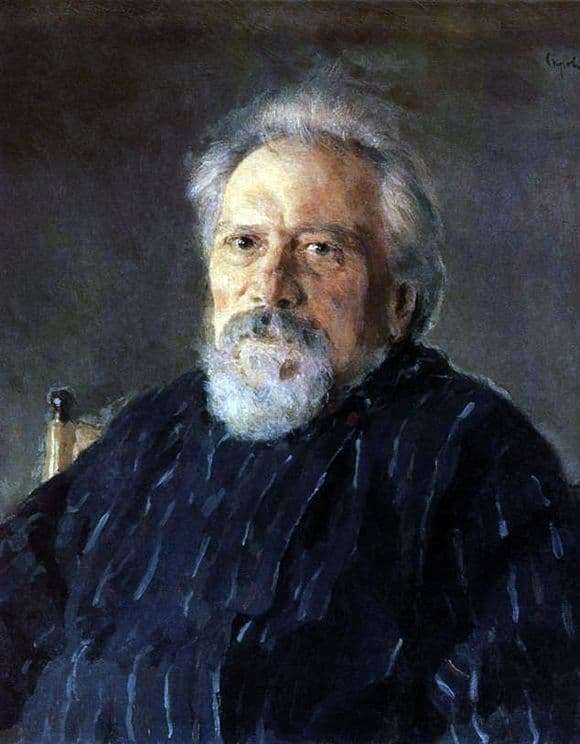 Valentin Serov is one of the most famous Russian artists, famous throughout Russia and the world with portraits in which he captured the intelligentsia of his time. Serov wrote many portraits by order of the collector Tretyakov, and with N. S. Leskov artist began to work specifically for the gallery patron.

In 1894, months before the death of the famous writer, Valentin Serov and wrote his portrait. It was this image that was destined to become a landmark and capture the image of Leskov for future generations, because even a hundred years later, most remember what the writer looked like because of this portrait of Serov.

The portrait is rather typical for the brush of the artist. The central location of the figure, with the seizure of shoulders and chest, but with cropped arms (as opposed to earlier portraits). Neutral dark background is also not an innovative solution, and fits well with the composition of the picture. But the main thing is its hero himself.

A long-grayish writer whose face expresses the weight of past years. As you know, in the portraits of Serov, the eyes of the people depicted are always important. And Leskov’s eyes are truly fascinating. The writer looks attentively, patiently and warmly, thus disposing of the viewer to himself, and telling his story.

It is known that Leskov was already sick when the portrait was created. Knowing this fact, his strong and unbroken look seems even more impressive. The picture itself is very simple, both in compositional and in color.

Indeed, it lacks unnecessary details and elements of the interior, and the color consists only of shades of several colors, but such “simplicity” fits the way of life of the writer and emphasizes his age.

Portrait NS Leskov deservedly took one of the places of honor in the Tretyakov Gallery, which he called “portraits of famous Russian artists and science.”