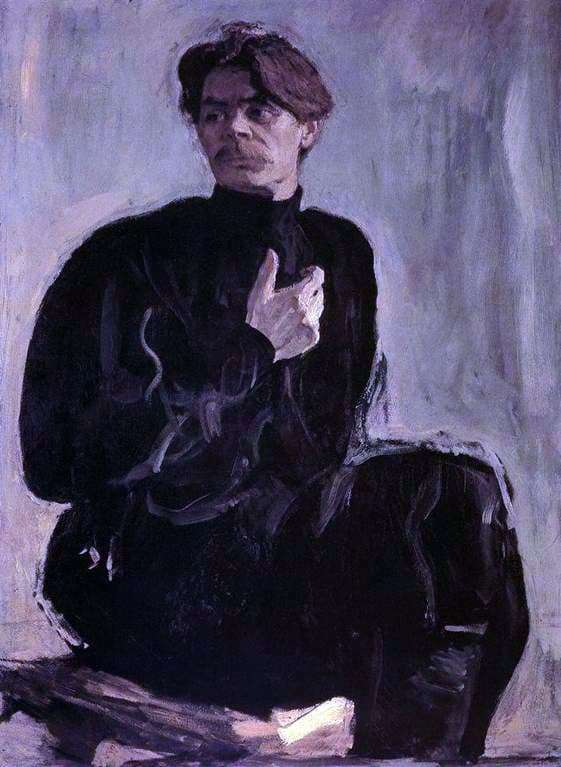 On the eve of the 1905 revolution, portrait painter Valentin Serov writes Maxim Gorky. The work is done in the spirit of the era, dynamic and restless. Representing significant people is difficult, but much more interesting. The artist made every effort to “Portrait of Gorky” became a reflection of the appearance and deep philosophical views of the great writer.

We see in the picture a young writer Gorky. The features are easily recognizable: lush mustache, slightly frowning eyebrows, a serious look. The figure of the writer stands out a black spot on a light blurred background. Nothing distracts the eye from the personality of Maxim Gorky. With the maximum detail, the author of the portrait depicted the features of the person being portrayed. All the clothes of the hero are black. This is a simple shirt and pants tucked into boots.

Attracts to itself the gesture of the writer’s right hand. The brush is leaning against the chest, as if the man is having a tense conversation, convincing him of something outside the picture of the interlocutor. The direction of view of Maxim Gorky is also directed somewhere beyond the framework of the canvas. We immediately see this philosophical conversation. The great figure of Russian literature proves one of his ideas. After all, he was not only a genius writer, but also a thoughtful thinker.

The revolutionary era is beautifully reflected in the “Portrait of Gorky.” The image of the writer is filled with dynamics. The figure is painted stately, it does not fit within the canvas. Russian artist Serov wanted so to express personal admiration for the activity and manner of thought of A. M. Gorky.

Portrait style is defined as impressionism. The technique of writing the image is a delight. The way the background and the black clothes of the writer are written with deliberate negligence clearly contrasts with the striking clarity in the display of facial features. Serov boldly plays on contrasts, drawing the viewer to the personality of the genius of literature.