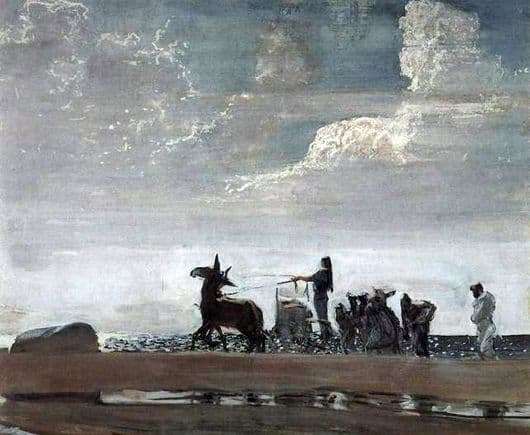 The picture was painted in gouache on cardboard in 1910.

Cloth Serov Odyssey and Navskaya belong to the genre of mythological painting. Serov painted a picture of the events described in ancient Greek myths and legends. Homer’s poem “Odyssey” tells that Navsikaya saw in a dream the goddess Athena, who told her to go ashore to wash clothes and get ready for the upcoming wedding. The goddess presented herself in the face of her friend Navshikai.

The girl did so, on the beach she began to play ball with her maids, during the game they accidentally discovered Odyssey. The servants of Navsikai were very frightened, but the girl understood that there was a shipwrecked man in front of her. She was able to speak to him, thanks to the power that the goddess Athena had given her.

Navskaya saved Odysseus’s life and dreamed that he would marry her. Her father helps Odyssey back to her homeland. She went after Odysseus, captivated by his beauty, but soon decided to return, because she did not want to be seen with a stranger.

Serov’s painting is a kind of illustration of the great work of Homer. He portrayed Navsikayu, driving along the bank of the Phoenicians, on a chariot. This is exactly the shore where Odysseus was thrown. Navskaya proudly and grandly stands on a chariot drawn by two mules.

Her maidservants follow her, the column is completed by Odysseus in white robes, which Navskaya gave him. Although the images are not clear, but you can see that Odysseus is depicted exhausted and tired.

The clouds on Serov’s canvas resemble the image of ancient gods and heroes who watch everything that happens. The artist depicted the sky, which occupies most of the canvas, prescribing each stroke with a special depth.

This event was detached on the canvases of many artists.

The painting is in storage at the Tretyakov Gallery, Moscow.