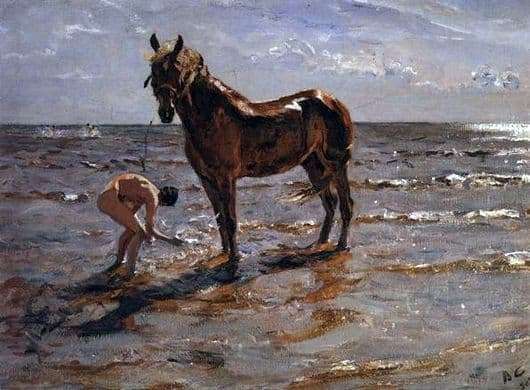 At first glance, the picture is simple and does not require any interpretation at all. A young man bathes a horse – what could be easier? And, probably, in the brush of any other artist, this scene would have remained an ordinary etude, unfinished and insufficiently artistic, which captured a casual domestic scene.

Any other artist would have had that, but not Serov, because his brush allowed him to create a true masterpiece – from visual and psychological points of view. Even a person who is not familiar with the works of Serov will understand that the picture is fraught with deep content, that which is hidden behind an ordinary, it would seem, sketch.

The very atmosphere of the painting is permeated with the author’s longing for youth, the brightness of sensations.

Look closely: the working young man is in a hurry, his gaze is not aimed at the horse, which meekly stands and waits for washing. No, he looks away into the distance – where, perhaps, his friends are swimming and frolicking. The motives of freedom, liberty, rebelliousness are implicitly set by the animals themselves, which most of us associate with these concepts, and the sea. The latter is rather calm, it only worries a little, and this gives the picture a touch of pacification, makes it not so gloomy.

The sky, however, begins to turn a purple hue, but this is a sign of impending twilight, and not of bad weather. So the boy’s work must come to an end soon; a couple of movements – and the person with the animal will rest. It should be noted that the author was equally successful in both the characters and the seascape, which was transmitted remarkably accurately and vividly.

Of course, in order to inspire the audience the desired impression, Serov had to carefully consider the style of writing, make it more energetic. Only then grateful connoisseurs of his work will feel the artist’s piercing longing for happy days that have long gone.