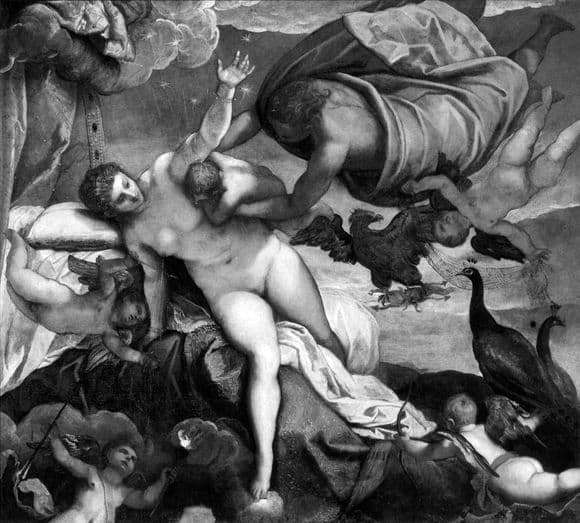 We see an artistic interpretation of the myth. Jupiter longed for his son to be immortal. The child was given birth to him by an ordinary woman. In order for the baby to live forever, it was necessary to press it to the lush breast of the goddess Juno herself. Her miraculous milk was supposed to bestow immortality. Juno was taken by surprise and involuntarily recoiled. Milk suddenly splashed in all about. As a result, the well-known Milky Way appeared.

The composition of this canvas is incredibly tremulous. It is built on the bright contrast of the maid that Jupiter sent to Juno and the goddess. The maid invades from somewhere outside the space of this canvas. Juno’s magnificent body is written with special love. It impresses with its forms and delicate skin color.

The flight of the maid is sharp, and the movements of the goddess are incredibly soft. Such a contrast can enchant anyone.

Below Tintoretto depicts wonderful angels. They hold various symbols that demonstrate love. One of these cute creatures holds the net. Most likely, this is a special symbol of deception, to which Jupiter involuntarily resorts in order for his son to become immortal. The eagle soaring in the background has always symbolized power. Peacocks on the right are also depicted by chance. They were the constant companions of Hera. The carriage of the goddess was set in motion by these magnificent birds.

The riot of colors is impressive. The artist skillfully depicts skin color. He is so natural that the characters seem alive. The maid’s robe and luxurious fabrics, on which Juno is reclining, become a bright spot. Tintoretto enjoys lush colors. His whole picture seems to be imbued with the sun. Mythological characters become as alive as possible. In this creation, you feel the dynamism. It seems a moment more, and all the characters miraculously come to life.